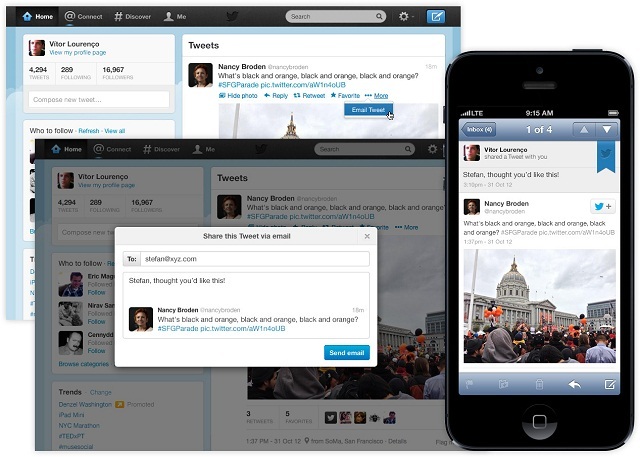 Although Twitter has been around for almost 6 years now, there are still people that don't use or know about the microblogging service. In those 6 years, it also wasn't possible to e-mail a tweet to someone. The company announced in a blog post that 'sharing just got easier', because now you're able to email a Tweet directly from the main website. The new feature could enlarge Twitter's user base by simply grabbing the attention of non-tweeters.

You won't need to copy and paste the text into an e-mail yourself anymore. Just click on 'more' next to the reply, retweet and favourite button and choose 'e-mail tweet'. Then you can add the address you want to send the tweet to, along with an optional message in a pop-up.

Twitter clients like Hootsuite and Tweetdeck already had this feature for a long time, but it's a nice addition if you're not using special software to view and send tweets. The new feature will be rolled out over the coming weeks for all users.

The engineers at Twitter are also building an app for Windows 8 in case you didn't know.