Just recently, social media service Twitter announced a new feature named 'Lists', aimed at organizing those you follow, as well as helping with mass followings. Just earlier, the feature went live for a number of people, though it came with a 'beta' tag and a warning not to mention it.

The feature is just as you'd expect; you can create your own lists, give them custom names, and then proceed to add those who should be on it. From your own account, you can see which lists you've created and which ones you've been place on by other people. To top it off, Twitter itself has put together a list of its employees, totaling 108 different accounts.

Keep in mind that, as mentioned, this is still in beta... Twitter hasn't said when the feature will be officially available, though with the bigger rollout today, expect it to become available pretty soon. We've included some screenshots of it below, in case you didn't get chosen to try it out, though you can find some more at Mashable and TechCrunch. 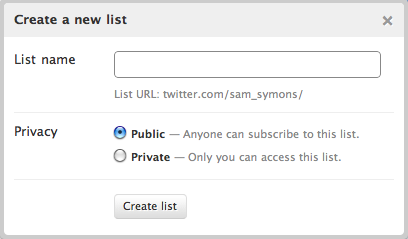