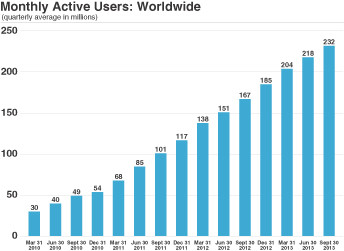 When Twitter officially filed for its IPO a few weeks ago, the social networking service said it had 218.3 million active users. However, those numbers were based on what Twitter recorded at the end of the second quarter of 2013. Today, in a new filing with the the U.S. Securities and Exchange Commission, Twitter offered some updated user numbers for the end of the third quarter of 2013.

The document stated that Twitter now has 231.7 million monthly active users, up 6 percent from the end of the second quarter. Overall, the company's users numbers went up 38.74 percent in the third quarter compared to the same time period a year ago.

Twitter's revenue also went up to $168.6 million in the third quarter, up from $139 million in the second quarter and much higher than the $82 million it brought in for the same period a year ago. However, the company still has yet to turn a profit. Twitter also confirmed today that its stock will be traded on the New York Stock Exchange, rather than the tech-heavy NASDAQ. As the company revealed a few weeks ago, it will use the stock ticker name "TWTR" when its shares start trading on the NYSE sometime in 2014.