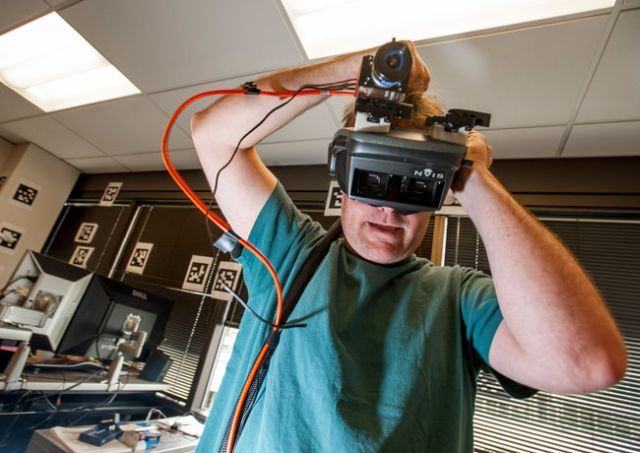 A few days ago, Valve posted up a job listing looking for an "industrial designer" that got a lot of buzz on the Internet. Today, The New York Times has posted up a new feature article on Valve which has a picture and description of one of the company's hardware products.

The article describes what the author sees while using a prototype of a virtual reality goggle hardware product. The author states, "It immerses me in a virtual world. I whirl one way and see zombies preparing to snack on my flesh. I turn another and wonder what fresh hell awaits." It sounds like the author was viewing one of Valve's Left 4 Dead games while using the device.

The article doesn't state when, or even if, these new gaming goggles will be released. Most of the article talks about how Valve tries to do things differently, such as hiring an economist or launching their own hardware projects.

However, some are not convinced that virtual reality goggles are the next phase of gaming. Peter Moore, an executive of Electronic Arts states that he can't see this kind of hardware gaining a mass audience, saying, "It’s appealing to them (Valve) because they live in that outer fringe of I.Q. and money.”

Of course, it wouldn't be a Valve article without a slam against Windows 8, which the company's co-founder Gabe Newell has been happy to do for the past couple of months. Newell feels that Microsoft is trying to copy Apple and its closed platform iOS operating system. Newell states:

We would say to Microsoft, we understand all these frustrations about the challenges to your business ... But trying to copy Apple will accelerate, not slow, Microsoft’s decline.