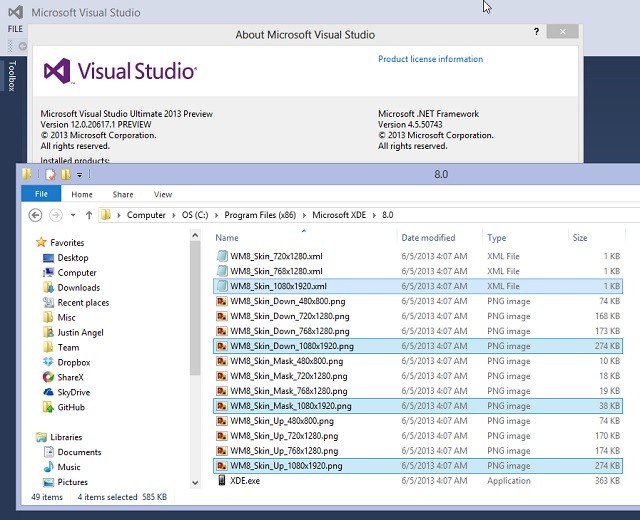 Windows Phone 8 has yet to officially support 1080p displays, but digging into Microsoft's recently released Visual Studio 2013 Preview has revealed 1080p assets for a Windows Phone 8 emulator, hinting that 1080p support isn't too far off. Justin Angel discovered the files relating to a 1080p Windows Phone emulator, which allows developers to run a virtual version of Windows Phone to test their apps and games.

Previously Visual Studio only had emulator skins for currently supported Windows Phone resolutions, such as WVGA (800 x 480), 720p (1280 x 720) and WXGA (1280 x 768), so the inclusion of a 1080p (1920 x 1080) skin gives a pretty strong indication into what to expect in the future. Of course OEMs will have to come out and produce phones with 1080p displays inside, but at least developers will have the tools available to swiftly update their apps to support the latest resolution.

Rumor has it that Windows Phone's GDR3 update slated for release later this year will bring support for 1080p displays, although only for devices with 5-inch displays or larger. This will allow OEMs to produce larger smartphones and 'phablets' with high-resolution displays to compete with the latest Android flagships, most of which include 5-inch 1080p displays like in the Samsung Galaxy S4 and Sony Xperia Z.