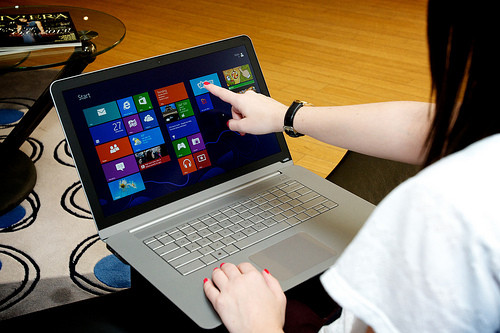 The company's new touchscreen notebooks come in 14- and 15.6-inch versions, and users will be able to pick from either AMD or Intel processors inside. The 14-inch notebook has a starting price of $1,089 if you select the AMD A10 chip, while the Intel Core i7-powered version has a starting price of $1,419. As far as the 15.6-inch Vizio notebook, picking the AMD chip will set you back $1,189, while the Intel-based 15.6 inch notebook costs $1,469. At the moment, only the Intel 15.6-inch Vizio notebook is for sale via the Microsoft Store website. All the other models are available for pre-order but a launch date has not been announced.

The new version of Vizio's 24-inch, all-in-one touchscreen PC also comes in AMD and Intel versions. Picking the AMD A10 PC will cost consumers $1,279.99, while the Intel Core i7-based model will set people back $1,439.99. The 27-inch Vizio all-in-one only comes with an Intel Core i7 processor and is priced at $1,549.99. The AMD 24-inch model is on sale, again, at the Microsoft Store website, with the others available for pre-order.

Vizio announced at CES 2013 in January that it would release a 11.6 inch AMD-powered Windows 8 tablet, but so far that product has yet to go on sale.