The laptop used was a 15-inch MacBook Pro with 2.5Ghz Intel Core 2 Duo, 4GB of RAM with a 512MB Nvidia GeForce 9600M GT video card. Snow Leopard was installed on a stock 320GB hard drive (Hitachi model HTS543232L9SA0), while Windows 7 64-bit was installed on a 320GB Western Digital Scorpio Blue (model WD3200BEVT). The hard drives were identical in the tests, both supporting SATA 3Gpbs interface with 8MB of cache memory, spinning at 5,400rpm.

Windows 7 64-bit was running on Boot Camp 3.0. The computer was set for high performance in power management for optimum performance on both operating systems. All software tested was in 64-bit, except QuickTime and Call of Duty 4. 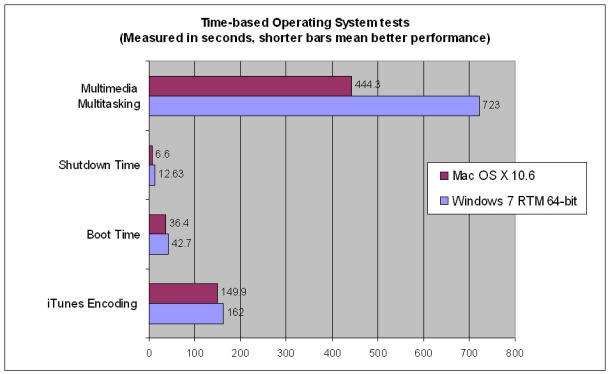 The benchmarks indicate that Mac OS X 10.6 (Snow Leopard) performs better, on a MacBook Pro. However, Windows 7 64-bit seemed to run applications like, Cinebench R10 and Call of Duty 4 better, even on Mac hardware. The battery performance test was a bit skewed because Boot Camp and the drivers were using more energy than Snow Leopard would have been. Windows 7 64-bit has been seen to last longer on a full charge with other laptops. 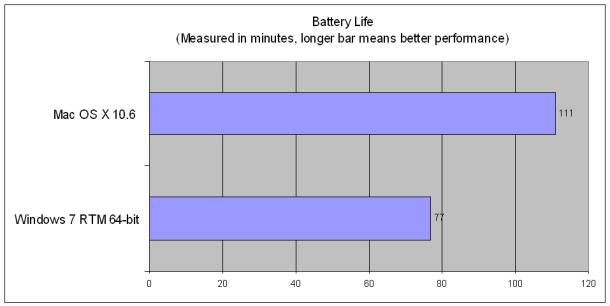 It appears that Snow Leopard users are getting better performance than Windows 7 would, but by seconds. Windows 7 64-bit users would be the better choice for gamers, who would get better performance when running games, not to mention more games are available for Windows PCs than Mac computers.