Security-wise, things don't look so bad for Windows 8 and the new measures implemented by Microsoft. Security firm and anti-virus maker BitDefender recently performed a number of tests on the stock, out-of-the-box Windows 8 configuration and concluded that just 15% of "the 100 malware families most used by cyber criminals this year" managed to infect the system.

Of course as BitDefender makes anti-virus products they tried to spin this by saying Windows 8 is "prone to infection by leading malware threats", but really, blocking 85% of threats with just Windows Defender enabled shows that Microsoft's in-house and bundled solution is quite effective. BitDefender tested 385 of the most popular malware samples, and 61 of those infected the system. 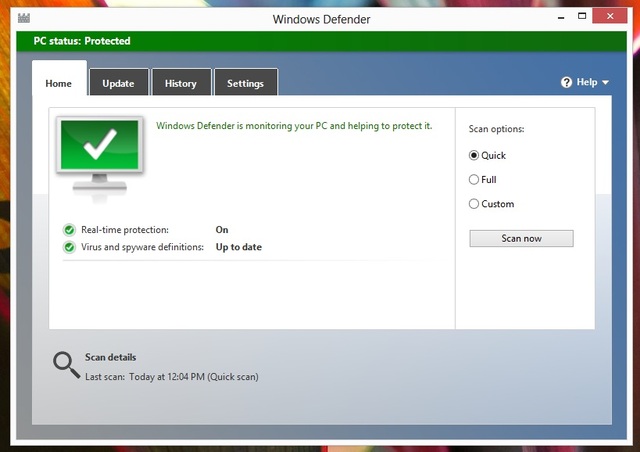 Windows Defender in Windows 8 does a decent job

According to Softpedia, the same tests were run on stock Windows 7 and 262 pieces of malware successfully executed malicious code (68%), which is considerably higher because Windows 7 does not have the improved version of Defender installed. One can then conclude that in a stock configuration, Windows 8 is much more secure than Windows 7.

Of course it should be noted that if you disable Defender to bring your system to the same level as Windows 7, the results are going to be significantly worse, but still slightly better than Windows 7. 234 of the 385 samples ran perfectly (60.8%) with Defender disabled, while the remaining failed to execute for numerous reasons, and out of the failed executions only seven were stopped by user account control.

Now while 85% is a great effort by Microsoft and their in-built Defender, it is of course still not perfect as it didn't block everything and let 61 pieces of malware infect the system; this value should be noticeably less should you choose to purchase a third-party anti-virus software. But the improvements to out-of-the-box security, blocking 85% of malware in Windows 8 as opposed to 32% in Windows 7, should definitely be noted as good work by Microsoft.

Via: The Next Web
Source: PR | Softpedia