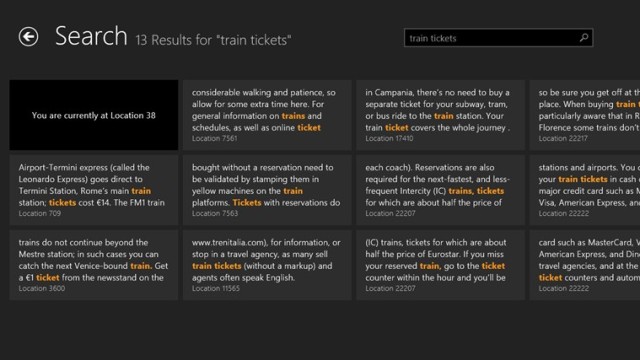 Amazon launched the first version of its Kindle app for Windows 8 several months before Microsoft's latest OS was officially released. The last update for the Kindle app was made in March, which added some minor new features and improvements.

This week, Amazon released the latest version of the Kindle Windows 8 app, via the Windows Store, and this time it's a major upgrade. Amazon labels its as version 2.0.0 and it brings with it a host of new features. One of them is shown in the above screenshot as the Kindle app can now search for words or phrases from inside an eBook. This should make using the app much more handy for research purposes.

The new version also lets users sample recommended books, and there's been a redesign of its Notes and Bookmarking features, adding filters to the mix. The Home screen of the app has also been redesigned, along with its in-book navigation. The app also has an easier way to bookmark pages and the Kindle's Live Tile now displays the current eBook that the users is reading.

Finally, there's been some changes to the app's View Option's menu along with updates to the apps Library and Search views.