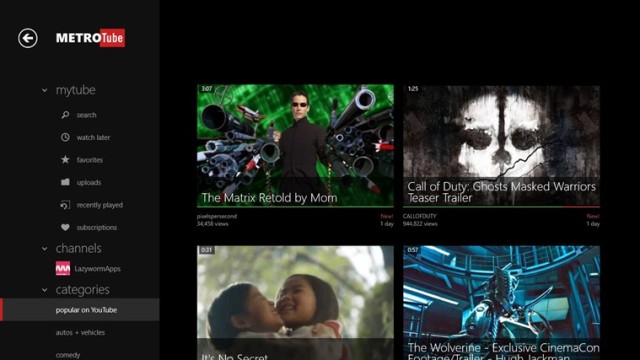 As promised in mid-April, developer Lazyworm Applications has now launched a Windows 8/RT version of Metrotube in the Windows Store. The third party YouTube player was originally launched for Windows Phone devices and that version has received tons of acclaim since its release in 2010.

This first version of Metrotube for Windows 8 is described as a "public preview" version and is free to download. YouTube users can access the app to subscribe to their favorite channels and can customize Metrotube's main hub to view the content they want to check out. The app also supports the streaming of full HD videos, along with sharing videos with others. It supports the snap view option, which allows Metrotube users to watch videos while running another app on screen.

Lazyworm Applications says they will be adding more features to Metrotube on Windows 8 in the future, including playlist support, pre-loading of video content and secondary pinning. Even though there are already a ton of third party YouTube players available for download for Windows 8 PC owners, having Metrotube, which has already proven to be highly popular on another Microsoft platform, come to Windows 8 is certainly welcome news.