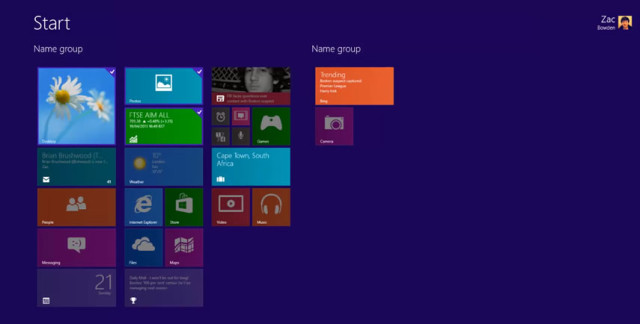 Earlier this month, screenshots of an leaked early build of Windows 8.1 showed that Microsoft's next Windows OS update could add a small download progress bar on the Live Tile for Modern apps. Now there's evidence that Microsoft may add some more app tile customization features for the Start screen in Windows 8.1

The newest leaked early build of Windows 8.1, version 9374, which was posted to some Internet file sites this weekend, lets users see a "Customize" button when they right click on the Start screen. The button dims all of the Modern app tiles on the Start screen when pressed. WinBeta.org, which first reported on this new feature, points out that current Windows 8 users only see a small checkmark when they want to move an app's tile around.

The new build also allows for app tiles sizes to be adjusted in four different formats (large, standard, wide, or small) and makes the name group of app tiles easier to edit. Of course, since this is a leaked early development build, there's no guarantee that Microsoft will put these features in the final version of Windows 8.1. However, we think they would be welcomed by power Start menu users.