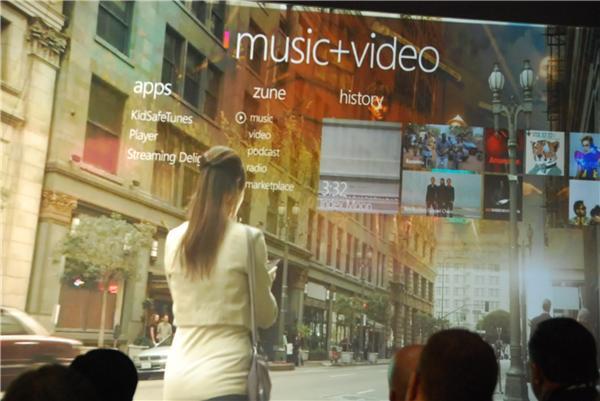 Microsoft has announced Windows Phone 7 Series at the Mobile World Congress in Barcelona, Spain.  The software was built from the ground up and will provide a new look and feel as not only has the interface changed, but so has the base code it is built upon.

The start screen will feature a tile interface that all have the ability to be updated in real time.  This will allow for a living interface that is no longer static.  The idea is that, lets say you put NASA’s picture of the day up as a live tile, each day that tile would be updated with that days photo.  No longer will you be forced to go to the site to view the image, the idea is that you’ll be able to get all of your info from the home screen.

Microsoft will also be pushing Bing with Windows Phone 7 Series (WP7S).  They have indicated that every phone that ships will have a dedicated button that will allow for one click access to search from anywhere on the phone.

The tiles, as referred to in the press release, are being called hubs, and in each hub, will have a dedicated base of information depending on the theme.  The hubs that appear to be debuting on the platform are People, Pictures, Games, Music+Video, Marketplace, and Office.

The Pictures hub is exactly what you would expect.  With integration of the PC and WP7S you’ll be able to share your photos in a more streamlined environment.  Microsoft states that this will be the best platform for sharing photos.

The Games hub will offer Xbox users a platform to integrate their Xbox Live account to their mobile phone.  WP7S will allow for users to be able to view their profiles, avatars, achievements, and the ability to see the spotlight feed too.  Games will also be shared across the platform too but to what extent is not known at this time.

The Music+Video hub will bring the Zune experience to the platform.  It is expected to have very similar functionality as the Zune hardware does and it appears that the Zune music service will also work on the WP7S platform too.

The Marketplace hub will allow for certified applications to be quickly and easily installed on the phone.  It appears that Microsoft will be adopting an application store that mimics what Apple is currently using.

The Office hub will bring access to the world’s most popular productivity suite.  Office hub will give users’ access to Office, OneNote, and SharePoint all in one place.  The end user will be able to view, edit and share any document too.

The platform is going to launch this holiday season.  While there is still a considerable amount of time before this platform will be in the hands of its users, it seems that Microsoft has baked in just about everything the rumors hinted too.