Only a fraction of consumers are using Windows Phones, but those who have taken the plunge like what they got. Although they were the smallest group studied, a Customer Think survey found that Windows Phone users were the most satisfied.

Although Android users represented 75% of those who participated, Google's OS came in fourth in terms of customer satisfaction, behind Blackberry but ahead of Symbian. Windows Phone won the day, beating out even Apple's religious users.

While the study doesn't go into detail on how users felt about each platform's strengths and weaknesses, it cites lackluster support from developers as a possible reason for why Android fell so far behind. 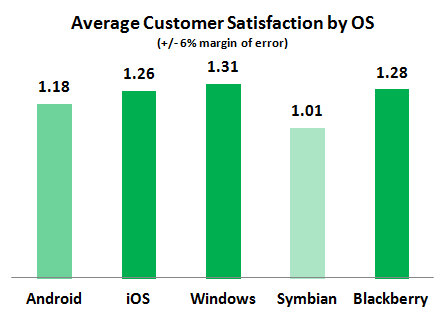 The most important factor for users in determing how they felt about a platform was reliability, followed by usability. Surprisingly, price was second to last on the list of determining factors. Users cared least about their device's music player functionality, probably not so much because they don't care about it, but because it is such a basic and ubiquitouis feature.

In terms of actual devices, the Blackberry Style 9670 and the HTC Rhyme were tied for the device with the most satisfied users. The Droid 2 Global came in second to last in terms of satisfaction, but it still managed to top the apparently near universally hated Motorola Citrus.

It might not be taking the market by storm, but Microsoft's Windows Phone platform is certainly doing well with those users who have chosen to adopt it. Right now, Microsoft is the underdog, a position that it isn't used to being in. And although it still has plenty of time to grow and become a major player in the market, right now it's hard not to see some similarities with the position Apple found itself in in the past. It's just a little bit ironic to see Microsoft behind a small platform with such a fervently loyal userbase.