Recently, Eurogamer got an exclusive look at the Xbox One X [then Project Scorpio] before it was revealed to the rest of the gaming community. Early impressions were positive according to what they saw and reported. The console would feature the 6tflop GPU Microsoft promised, and more details were shed on the CPU as well as the overall performance increase.

The only real benchmark we saw was, however, ForzaTech running on the console. This was presented with a single screenshot showing Forza running on Xbox One X utilizing just 65% of the console's capabilities at 4K 60fps. Eurogamer has finally revealed even more details about several unnamed games running on the console at 4K. These games are rudimentary ports, however, meaning that they didn't go through the usual optimization for the console. The resolution was bumped up to 4K by Microsoft and tests were done using their proprietary PIX system.

Some assumptions about the data were made by Eurogamer, assigning the likeliest games mentioned; as only the genre, resolution and frame rate was given. Some of these games give themselves away thanks to the data. According to Microsoft, Forza Motorsport 7 (Title B) scaled extremely well from base hardware to Xbox One X, with the game running at 60fps with around an 11ms frame time. On the other hand, Gears of War 4 (Title C) didn't prove as successful managing a mere 1ms frame time boost over base hardware, but a small bump in frame rate was noticed. Microsoft announced that they will upgrade Gears of War 4 to accommodate the new console at E3, and according to Eurogamer, they will have to put in a lot of work optimizing the game to achieve the promised upgrades. 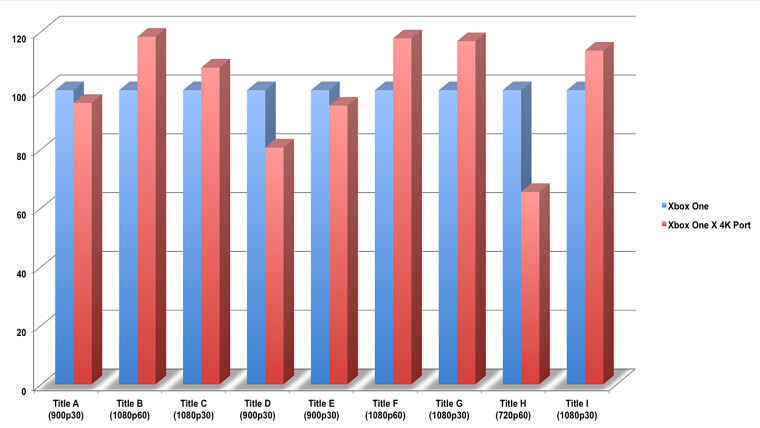 Other than that, 900p and 720p games running on the earlierXbox One and One S variant, had a more difficult time scaling to 4K, with Assassins Creed: Origins using checkerboard rendering to achieve the 2160p output. Star Wars Battlefront (title H), the only game that runs at 720p 60fps on base hardware suffered the most when the resolution was bumped up to 4K on the Xbox One X, with frame times and frame rate plummeting. The reason for this, according to Eurogamer is because the jump in resolution from 720p to 4K is much harder for the console than going from 1080p to 4K for instance.

With that said, Microsoft advised developers that they should expect an easy port to the Xbox One X with around 4 times the resolution boost. They recommended that developers start off with high-end PC settings, and of course, always consider checkerboard rendering if their vision requires a bit more headroom. Based on this information, if a game is currently running at 1080p on the Xbox One, the developer shouldn't have any trouble scaling the game up to 4K for the One X.

The Xbox One X will launch November 7th worldwide and will be priced at $499. Recently Phil Spencer said that they will announce pre-order dates in the summer, with more details for games running on the system following that announcement.