With the release of the iPhone and iPod touch, the in-built Music Quiz of traditional iPods had been lost in favour of more useful features, but with the advent of iPhone OS 3.0 the game has reared its time-wasting head once again in the form of a series of apps. We're going to take a look at three today, all of which have lite versions that you can sample for yourself. 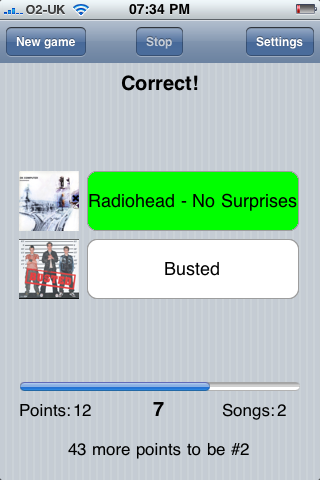 No Surprises in this app

Tunes Quiz is visually boring. For some people, this isn't a priority, but apps such as ConverterBot manage to be both functional and stylish, so in that department Tunes Quiz is a letdown. However, Tunes Quiz places the album artwork next to each choice, which some may find makes the game that little bit easier.

If you know anyone else with this app (or can pressure anyone else into buying this), you can play multiplayer over Bluetooth, which I wasn't able to sample, but maybe in the future Tunes Quiz will allow for internet play a la Tap Tap Revenge. The fact that multiplayer is even present already gives Tunes Quiz the edge, as neither of the other two games had multiplayer. The other advantage is Facebook and Twitter integration, which may delight some readers, but for those of us who have been on the receiving end of streams of messages proclaiming that "Mr. X just won over 9000 points in Super Duck Game", the integration isn't that interesting.

Gameplay-wise there's three types of question; "What album is this?", "What artist is this?", and "What song is this?". All pretty straightforward, and Tunes Quiz claims to be the only app that allows you to change the amount of choices and chances you have, but whether you'll actually ever touch these options depends on you. It's nice that altering them does change how much you score, though. 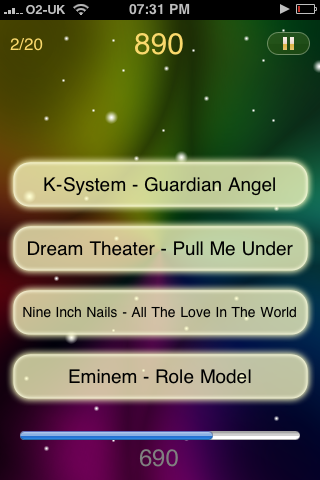 Choices fade out as time passes, in a similar vein to the original iPod game

My first impression of Music-Quiz was that it looked a lot like the original Tap Tap Revenge, which isn't a bad thing at all. Visually, Music-Quiz was the best of the three, despite lacking any sort of album art integration, unlike the other two. An unobtrusive bar slides away at the bottom, a pause button sits at the top with your score, and options are simple and to-the-point, but the game is still colourful and nice to look at.

In terms of extras you won't find anything mind-blowing. You can alter how long a game lasts, or if a game ever ends, how hard the questions are, and how the options slide in. Gripping stuff, but Music-Quiz isn't about extras and gimmicks, it's about doing what it's meant to do right.

It appears the only question the game will ask is "What song is playing?", and while some may consider this a flaw, others may find it keeps gameplay easy to follow and straightforward. The game is the only one that also allows you to actually pause the music in-game, but quitting out means game over. There's no denying that Music-Quiz is the most faithful to the original iPod game, and if that's what you're after above all, I'd advise you to stop reading here and purchase this app. If you want more, continue reading. 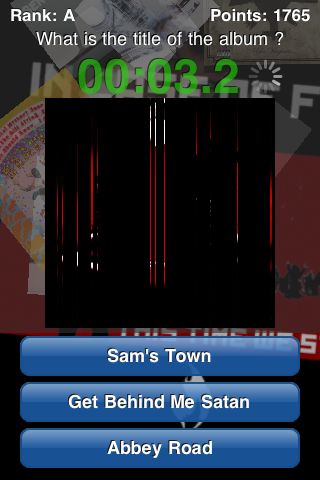 Music Library Quiz is the only one of the three to base questions on the actual cover art itself. Art is slowly revealed and the player must guess the album quickly. As someone who loves album art, this is a major plus to me, but some who don't care much for the visual aspect of music (or those without album art for their songs) may not see this as that big of a feature. The use of cover art is further extended in a swirling background montage of your album covers, which I promptly stopped from swirling in the settings screen because it's irritating and distracting.

Other than album art questions, questions also consist of song/artist/album guessing. You can switch question types on and off, but there's no switch for song title guessing, so if you wanted to have a game purely of, say, album cover guessing, you can't. It's a bit of an odd omission, but hopefully the developers will address the issue in an update. You can also choose to start at a random point in the song or at the beginning, and there are fixed game modes consisting of unlimited time, 20 songs, 2 minutes or 5 minutes of game time. You can also choose a playlist to be tested on. Overall, the options are enough to add lifespan to the game, but when it comes to true fine-tuning it's not on the same level as Tunes Quiz.

Music Library Quiz was the only one of the three where I couldn't find any sort of mid-game controls. The only "touchables" are the options, and even quitting out and returning won't let you escape (though this is a welcome feature). The only way to get out is to answer the question, but no matter what stopping the music in-game is out of the question. After a question is answered you can end the game, carry on to the next question, or find out more about the song (with cover art!).

Overall
I'd find it hard to recommend Tunes Quiz, but if you like the extra features it offesr and aren't interested in flashy visuals, you could make a far worse app purchase. Music-Quiz stays true to the original formula with satisfying results, and the tacky visuals of Music Library Quiz can be overlooked thanks to the innovative use of cover art and the ability to save a game when quitting.