Old hard drives, or "spinning rust" as some call it, are good for mass storage, but nobody will ever mistake them for high performance. SATA SSD drives are much faster than the old drives, and were a breakthrough over a decade ago, but pale in comparison to today's NVMe SSD drives.

The Sabrent Rocket Q4 utilizes the M.2 2280 form factor, which is standard for these types of drives, has a Phison PS5016-E16 controller, and Micron 96L QLC NV memory. It's available in 1TB, 2TB, and 4TB models. For this review, I'm looking at the 2TB version.

Performance varies based on the capacity, so the sweet spot appears to be the 2TB model, which roughly doubles the speed of writes. Current Amazon.com pricing as of this writing is $160 for the 1TB model, $320 for the 2TB version, and $750 for the 4TB drive. That equates to roughly $0.16/GB for both the 1TB and 2TB model and $0.19/GB for the 4TB model, making the 2TB version the sweet spot for both price and performance.

Utilizing QLC, the endurance of the drive is rated at 400TB, which shouldn't be a concern for most users. The drive comes with a five year warranty, but requires registration; if you don't register the drive, then the warranty only lasts for one year, which is pretty bad.

The drive requires PCIe 4.0 to run at maximum performance. You can use the Rocket in a PCIe 3.0 motherboard, but will obviously lose some performance by doing so.

It's clear that Sabrent is trying to convey that it is offering a premium product, something that the packaging helps reinforce. While the Samsung and AData NVMe drives I have both came in plastic containers, the Sabrent Rocket Q4 sits inside a copper colored metal clamshell. Inside, the drive itself is nestled in foam padding. While I appreciate the presentation, part of me feels like it's a waste of material. Regardless, it looks pretty nice. 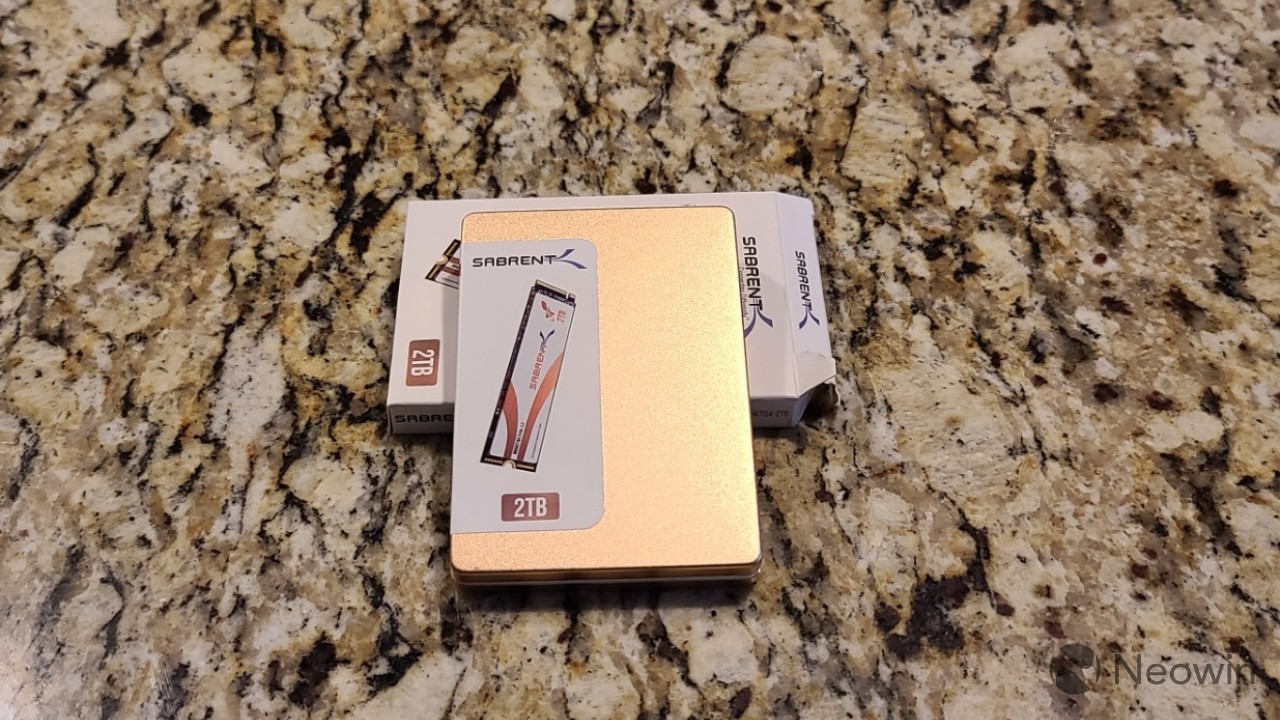 The copper and white coloring is maintained on the drive itself, giving the drive a very elegant and premium look.

Here are the details on the machine that I ran the test on.

So we know the Sabrent Rocket Q4 looks good and is reasonably priced, but how does it perform? To test that out, I ran a few benchmarks, including Samsung Magician, CrystalDiskMark, and the Final Fantasy XIV benchmark tool that tests loading times.

Overall, results were very good with a few oddities and some caveats. 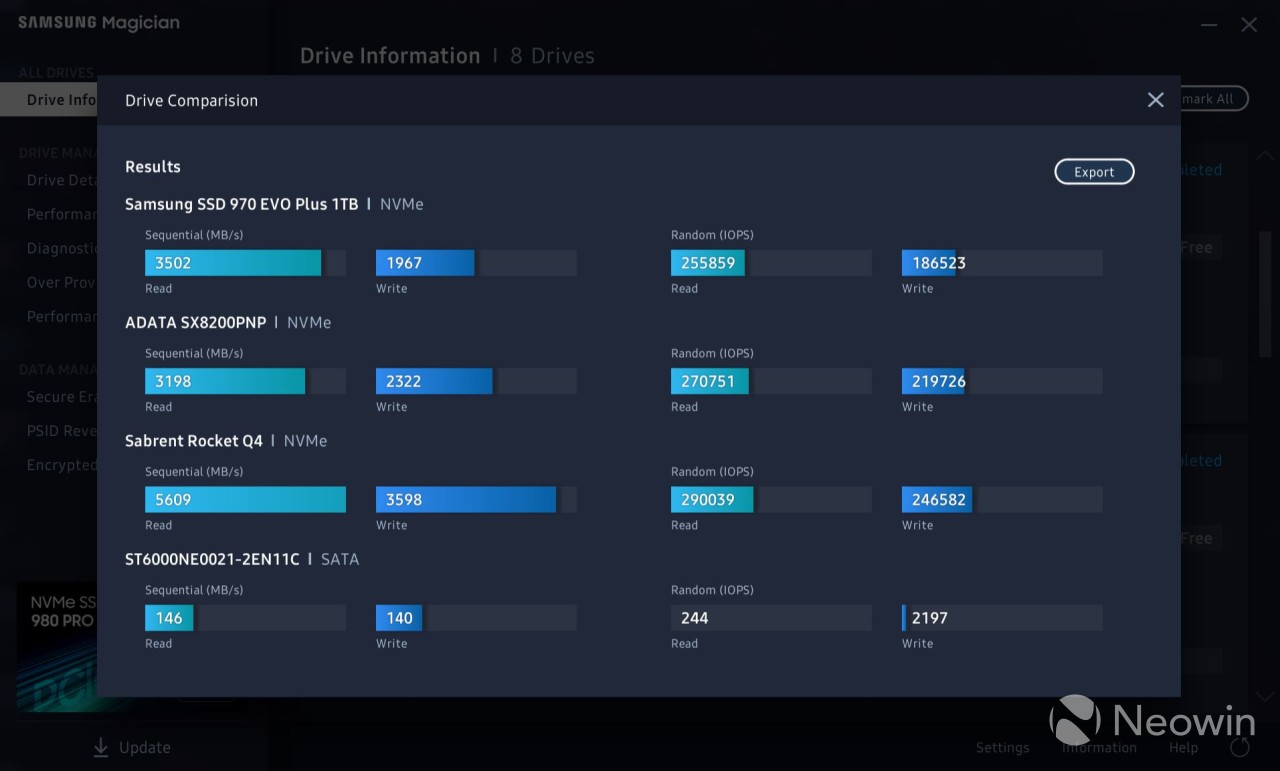 The machine I tested on currently has a 1TB Samsung 970 Evo Plus as the boot drive, a 2TB ADATA SX8200PNP for my games, and a 6TB Seagate IronWolf ST6000NE0021 for mass storage of music and photos. Running the Samsung Magician benchmark showed the Rocket with a sizable lead of 60% in sequential reads and 80% in sequential writes versus the Samsung 970 EVO Plus. The read performance was even better compared to the ADATA, but write performance didn't have similar gains - although it was still much better.

After using Samsung Magician, I ran the Sabrent Rocket Q4 through several different CrystalDiskMark benchmarks. In addition to running them on an empty disk, I ran them again when storage was over 70% utilized, to see if there was any performance degradation due to the capacity of the drive.

As you can see from the graphs, performance differences were statistically insignificant regardless of how much storage was being used, which is good. The performance, while not matching the speed shown by Samsung Magician, were still much higher than the other two drives in the test system.

While performance is excellent at 64MiB, read performance drops off considerably at 64GiB. This is especially curious because the ADATA drive performed the SEQ1M Q8T1 test at 3,248MB/s, and the Samsung drive was even better, reading at 3,565MB/s. This means that transferring very large files would have a more noticeable delay on the Sabrent Rocket Q4, although it's still extremely fast. 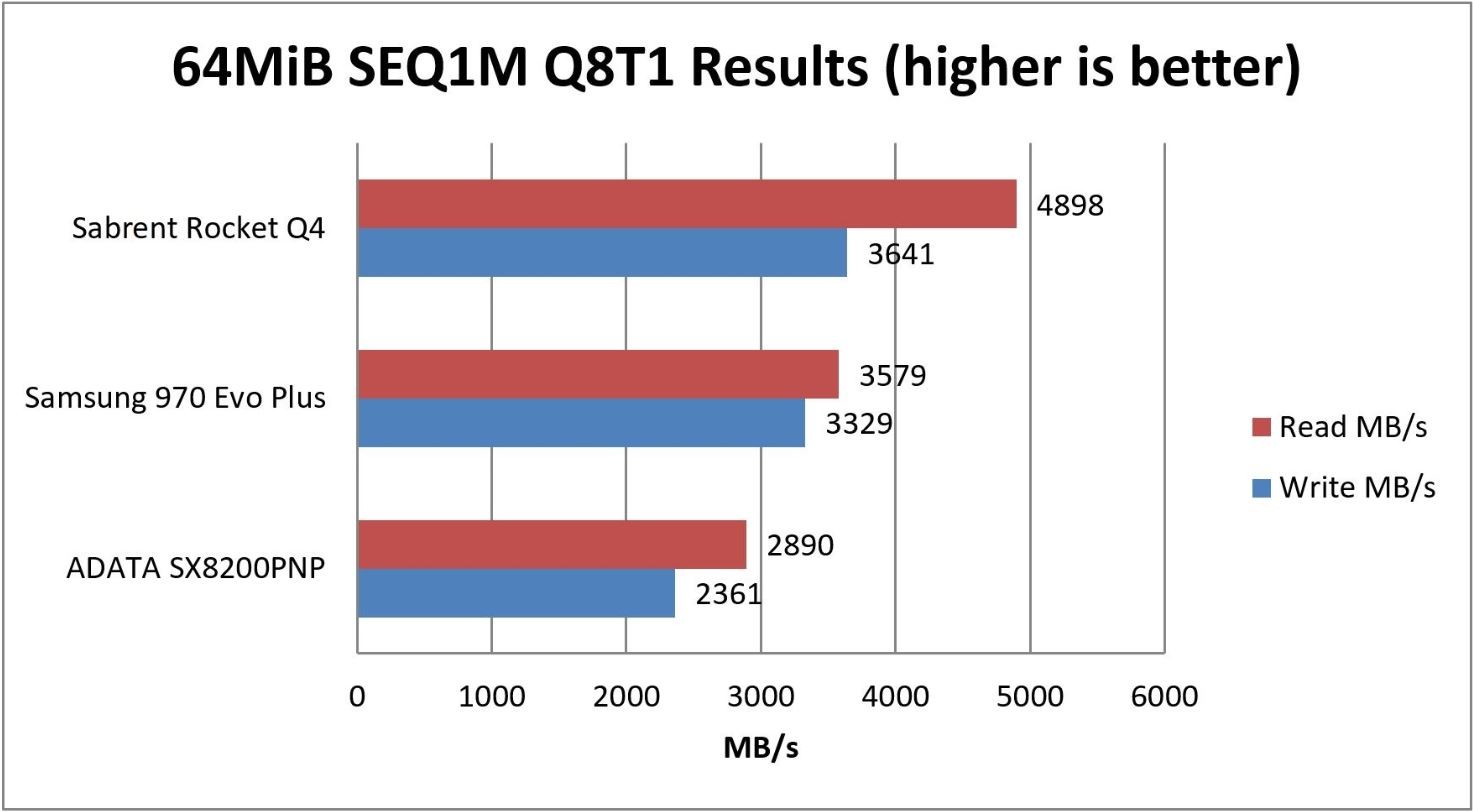 Comparing the three drives directly, you can see that the Sabrent Rocket Q4 is by far the fastest of the drives at 64MiB when it comes to reading, and is slightly faster than the Samsung Evo Plus at writing. Aside from the aforementioned 64GiB test, the Sabrent Rocket Q4 either tied or beat the other two drives in all of the tests. 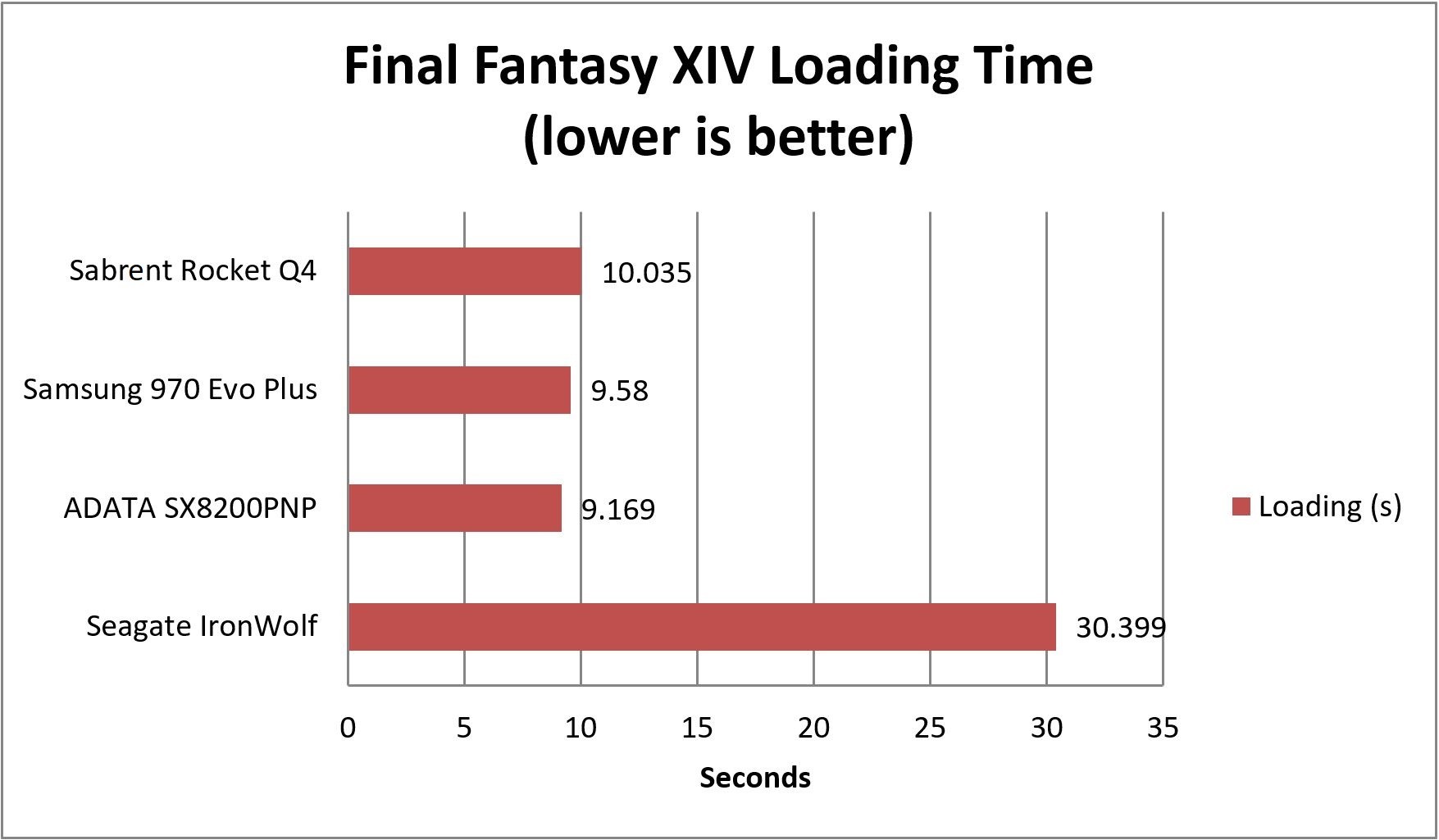 In addition to the raw performance tests, I also ran the Final Fantasy XIV loading time benchmark. This gives a real-world idea of how long it takes to load the game from your hard drive. It can also be used to test the overall performance of your system. The loading times for all of the NVMe drives were within a second of each other, while the "spinning rust" drive was more than 3x slower.

During all of the testing, the Sabrent Rocket Q4 maintained a cool temperature, averaging around 47°C. By comparison, the Samsung drive was 54°C and the ADATA was 52°C. Temperature seemed to have little impact on performance, as testing from a cold boot provided similar results as when the machine was running Folding@Home.

Sabrent offers an optional heatsink for the drive as well.

The Sabrent Rocket Q4 offers excellent performance at a great price. However there are three important caveats to keep in mind.

First, the drive utilizes PCIe 4.0. If you have an older system, or a newer system that doesn't support the latest PCI standard, your performance metrics will take a hit. The drive will still run at PCIe 3.0 speeds, but you'd be paying for speed you won't see.

Second, the drive has QLC flash, which means the endurance will suffer, providing only 200 TB of writes per 1 TB drive. For most users, this is probably fine, especially if you use the Rocket Q4 as a gaming drive, but the endurance directly leads to our next consideration. 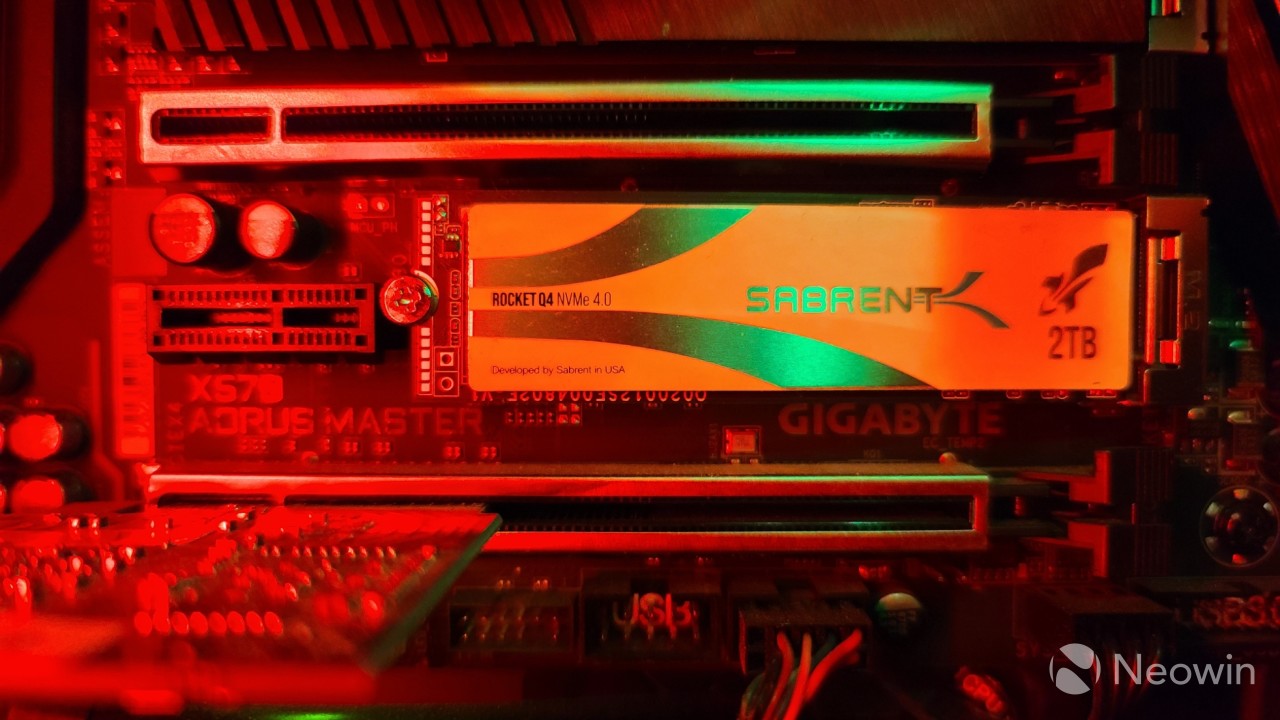 The warranty requires you to register your drive. If you don't, it's a simple one year warranty which is ridiculously low. This is an easy thing to bypass by simply registering the drive for a robust five year warranty, but make sure you don't overlook that step.

If any of the above three caveats are issues for your particular workloads, then I recommend looking elsewhere. For most people, however, the Sabrent Rocket Q4 is a quality NVMe drive that will provide blazing speeds at competitive pricing, and I can whole-heartedly recommend it.