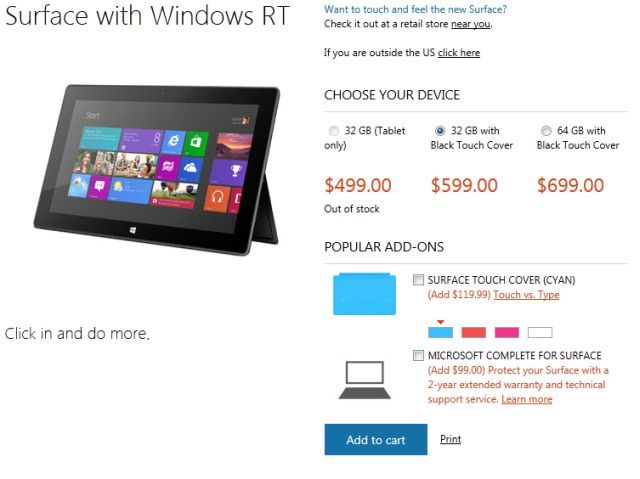 If you were hoping to get the cheapest version of Microsoft's new Surface tablet, but don't live near one of the company's retail stores, you may be waiting a while. According to the Microsoft Store's website, the entry-level version of the Surface, with 32GB of storage but without its Touch Cover add-on, is now "out of stock" on the US, Canada, UK, France, German and Australian sites.

The other two versions of the Surface (the $599 32GB with Touch Cover and the $699 64GB with Touch Cover) can now be ordered from those sites with no delays. The one exception is on the UK site, which is currently showing the $599 Surface as out of stock.

If you happen to live in China, you'll have better luck getting any version of Surface that you desire. All three choices are listed as being in stock on the Chinese Microsoft Store website.

Microsoft has yet to comment about official sales for the Surface so far. There is evidence that Microsoft's retail stores have seen high sales volumes for the tablet. However, we may have to wait until January, when Microsoft reveals its fourth quarter 2012 earnings, to find out more about Surface sales.