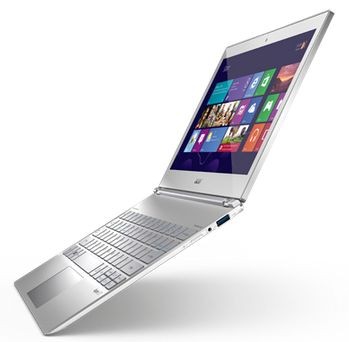 Acer executives have been very open in the past several months about the fact they didn't like Microsoft entering into the PC hardware space, starting with the Windows RT-based Surface tablet. Acer went ahead and launched a number of Windows 8-based PCs in 2012 with touch screens (including the thin and light Acer Aspire S7 notebook) but previously announced plans to launch a Windows RT tablet were put on hold until at least the second quarter of 2013.

This week Acer reconfirmed its plans to offer a Windows RT tablet sometime in 2013, but ITWorld.com reports that Acer executive Oliver Ahrens would not confirm a specific launch date. Ahrens said Acer feels Microsoft still needs to do some work on making Windows RT itself more appealing to the public.

Besides Microsoft, Dell, Asus, Samsung and Lenovo have already launched their own Windows RT-based tablets but aside from Acer, there are no confirmed future Windows RT products on the horizon. Ahrens claims that Acer could have gone ahead and launched its own tablet alongside the others but it wanted to see what the market was for a Windows RT tablet. Ahrens also claims that a Windows RT product made by another PC company has sold only 20 units a day so far, but declined to say which PC maker had that experience.

As far as Windows 8 hardware sales, Ahrens claims that they were hurt in part by the remaining units of Windows 7 PCs but now that they are moving off store shelves, the company has seen more progress in Windows 8 sales. He stated, "Surely and steadily the appreciation is growing, but it's not a boom."