If you're looking for a commercial laptop that's incredibly thin and light, Acer's TravelMate X514-51 might be for you. Last week, I reviewed the Acer Swift 7, which weighs in at under two pounds. The TravelMate X514-51 comes close to that though, at 2.16 pounds.

And that's still wildly light, beating out Lenovo's 2.4-pound ThinkPad X1 Carbon as the lightest 14-inch business laptop. But it doesn't make the same compromises as the Swift 7, using a full 15W U-series processor instead of the hobbled 5W Y-series chips.

Being a business laptop, Acer has some security features in its ProShield app, which lets you create your own secure drive, encrypt files, and more.

Acer's TravelMate X514-51 isn't the flashiest laptop, and that's putting it lightly. Like most devices that use a magnesium alloy, it looks and feels like plastic. Of course, using this material is what keeps the weight down, so if you want something that's this light, this is what you get.

And boy, is this thing incredibly light. It's the lightest 14-inch PC that I've ever seen that doesn't chop down performance by including a Y-series CPU. At just 2.16 pounds, it's the type of thing that you can throw in your back without realizing it's there. It's something that you can pick up with your fingertips.

It is 14.9mm thick, which is thicker than some thin and light devices. However, you do get USB Type-A ports, so all is forgiven. 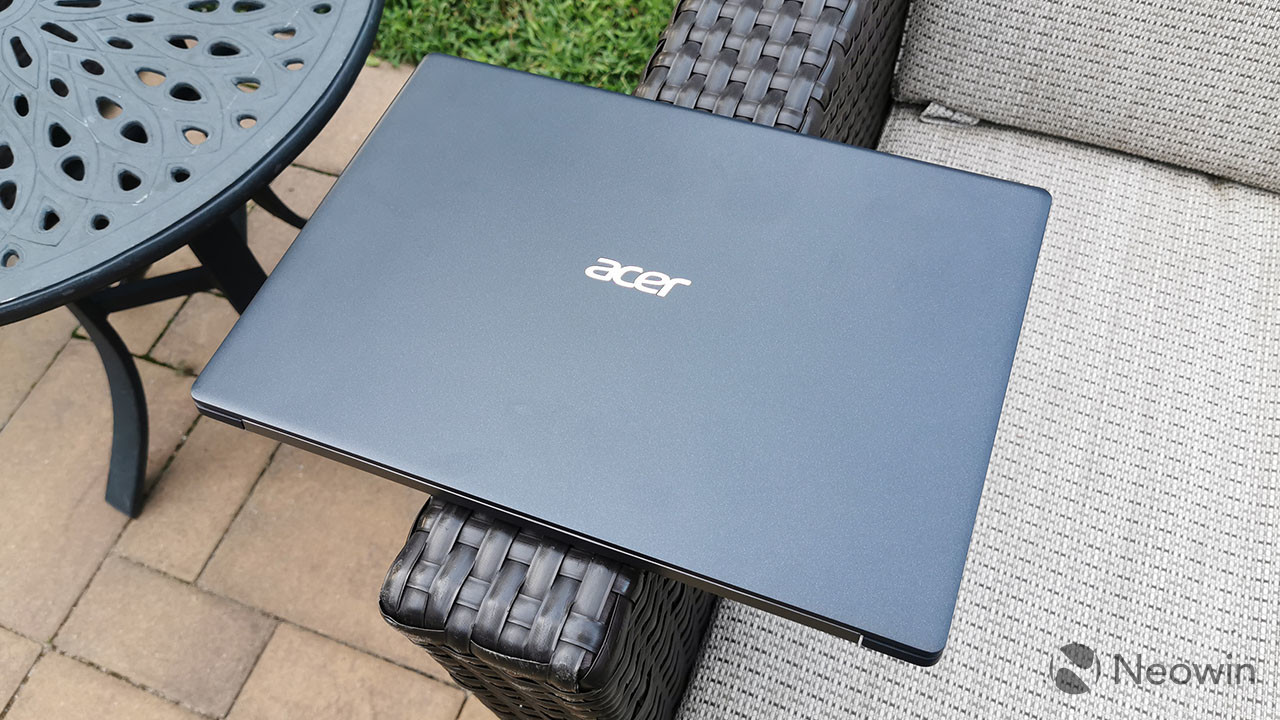 The lid is stamped with a chrome Acer logo, which is the one part of Acer's design that I typically enjoy. The logo itself and the metallic logo look sleek on an otherwise bland design. But of course, it's a business laptop, so flashy clearly isn't what you're going for. 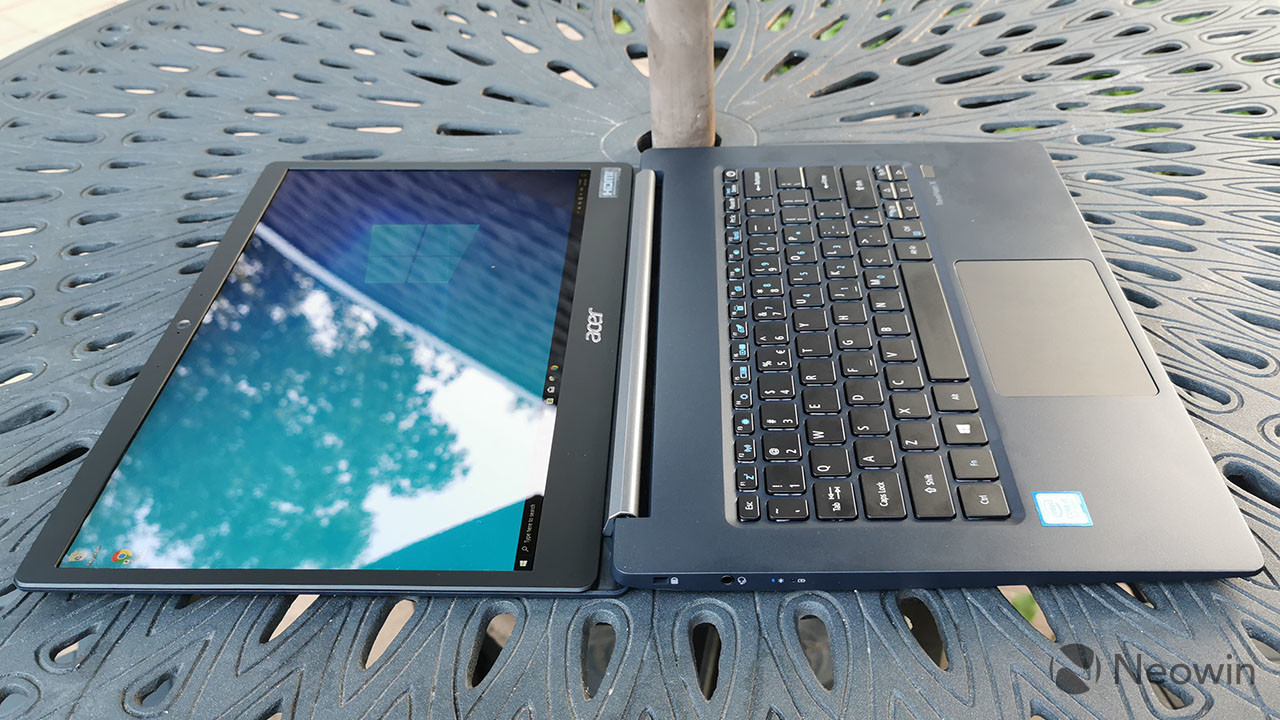 The clamshell laptop has a 180-degree hinge, so you can lie it completely flat. The screen supports touch too, so this might be a good orientation for making use of that. 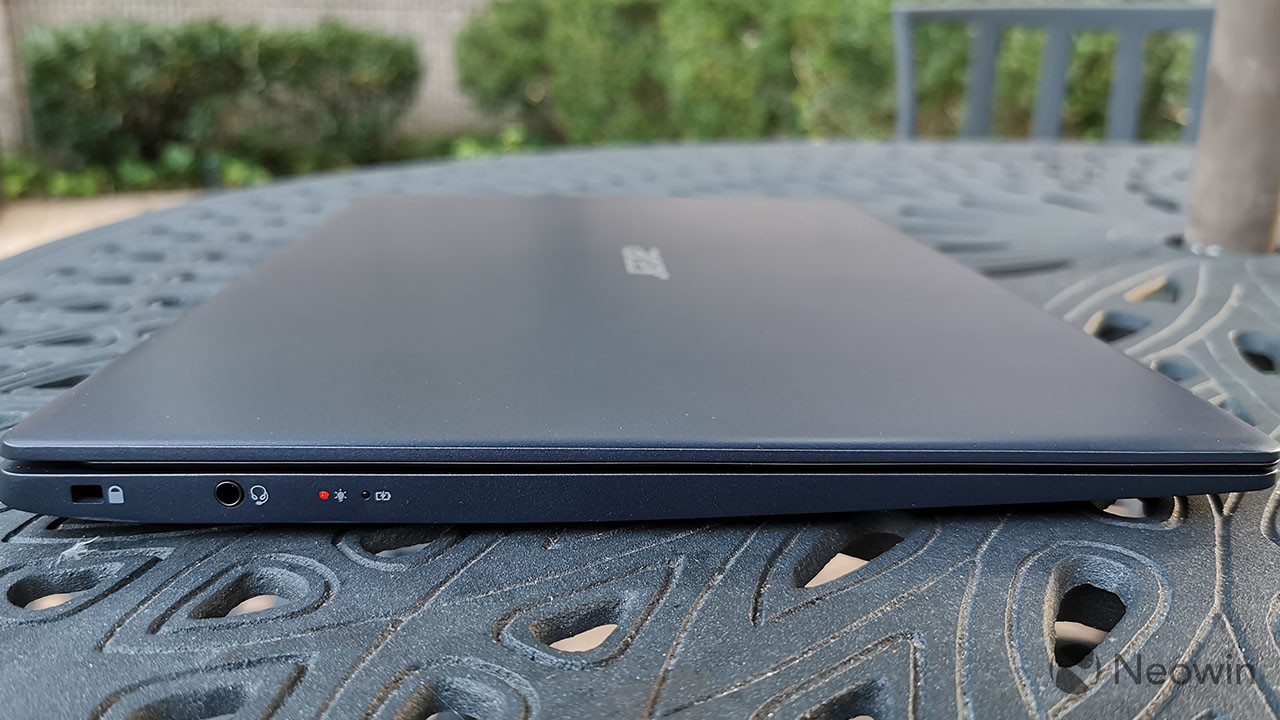 As far as ports go, the TravelMate has a few. This is another area where it has the ultralight Swift 7 beat. On the left side of the device, there's a 3.5mm audio jack and a Kensington lock. 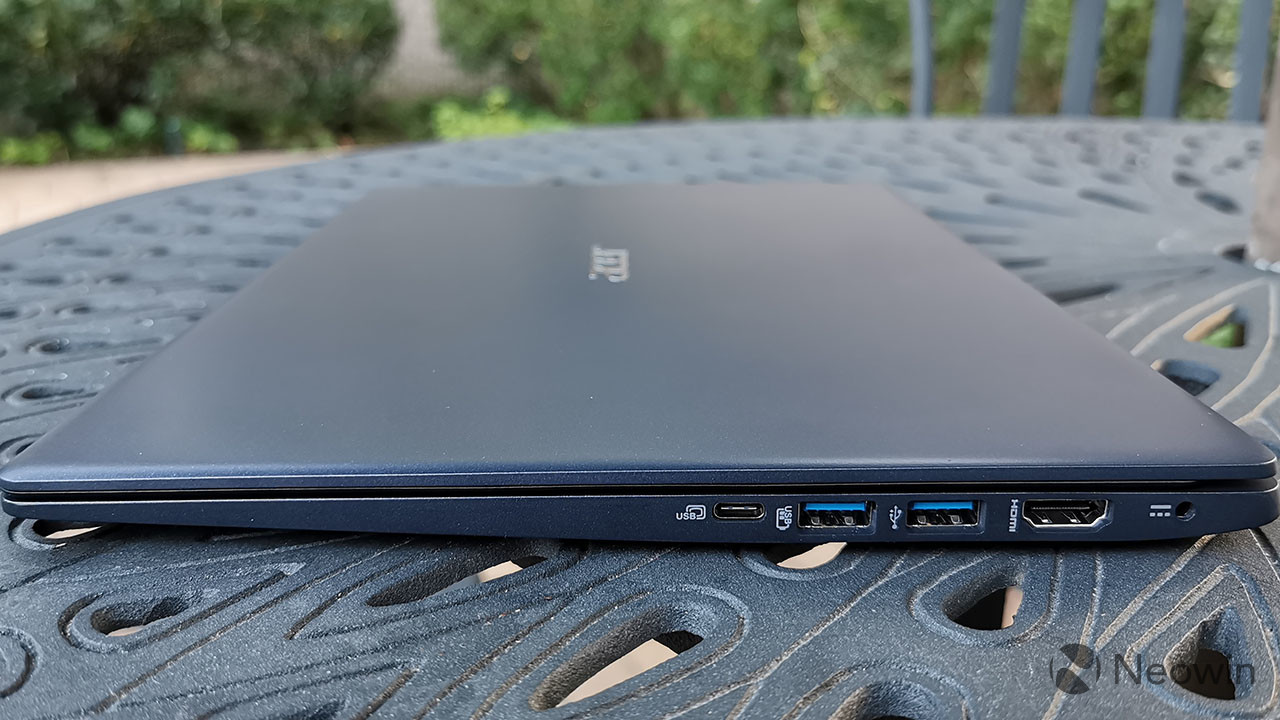 Any of the three USB ports are good for 5Gbps data transfer speeds, being USB 3.1 Gen 1. Thunderbolt 3 would be nice in the Type-C port, but unless you're actually making use of that 40Gbps speeds, you're not missing out.

The bottom panel can be removed with 11 Torx screws, and what's cool is that the 16GB RAM that's included is making use of one slot out of two. In other words, you can double the memory in this machine at some point down the line.

The Acer TravelMate X514-51 includes a 14-inch 1080p display with touch. As far as color accuracy goes, it does great. I do wish it was a bit brighter though. At 300 nits, it can get a little tough to use outdoors, and it's incredibly glossy. 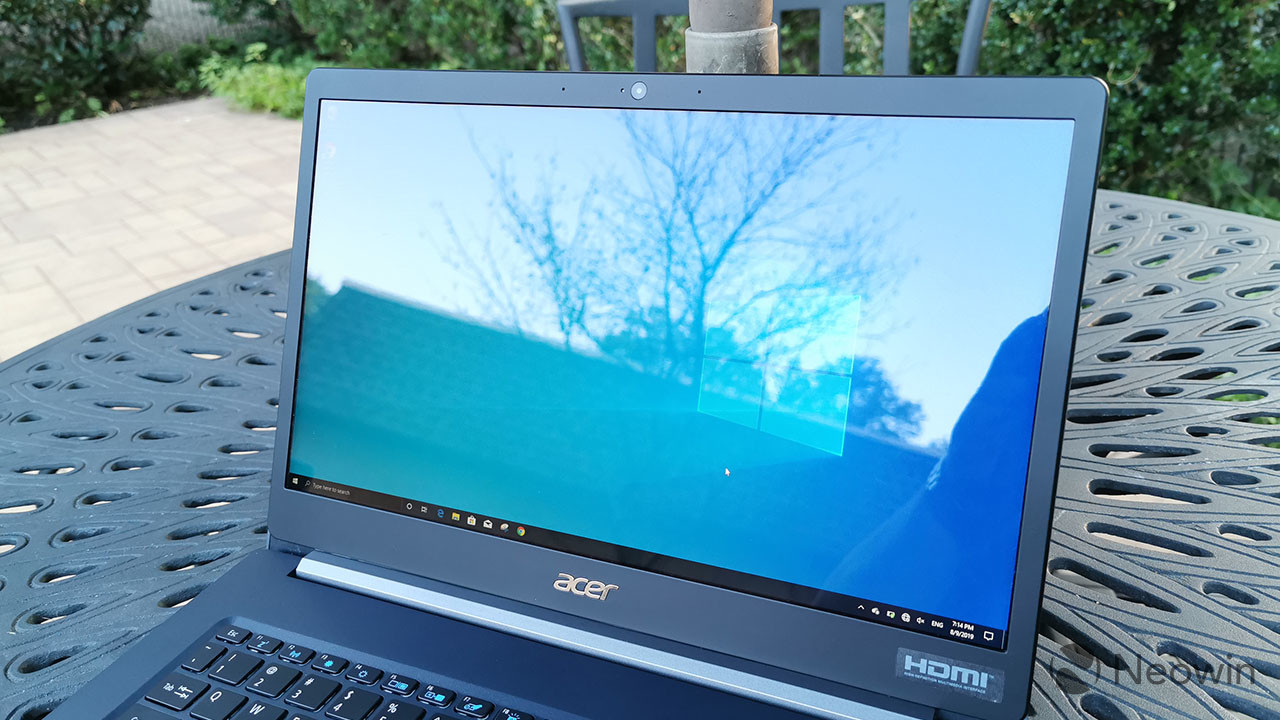 In general though, it's a good screen. Full HD is a decent resolution, and something that won't rob you of battery life like a 4K screen would. It looks good for work, and for streaming media. I also like the 16:9 aspect ratio, something that's not exactly trendy lately.

A lot of OEMs are moving to 3:2 or 16:10, but I like 16:9, especially on a clamshell device that's never going to be rotated into a portrait orientation. It just looks better with two apps side-by-side.

The size of the bezels around the screen are pretty standard for 2019, not shrinking them down too much. Being a business laptop, the webcam stays above the display. This is important for businesses, since the ability to make video calls is a must. A lot of consumer laptops have moved the webcam to below the display or in the keyboard, mainly because consumers tend to use their smartphones for video calls.

There's no privacy guard built into the webcam though, something that has become commonplace in business laptops, where security is paramount. Interestingly, Acer did include a privacy solution in the Swift 7, although that put the webcam in a super-awkward place, the left side of the keyboard.

As far as audio goes, I'd call it satisfactory. There are no tinny sounds, but it's just not loud. There are two downward-facing speakers underneath the device. If you're looking for a media machine, this really isn't it.

The keyboard on the TravelMate X514-51 is very shallow, given that the laptop isn't that thin. It is a full-size keyboard though, and it's backlit, so those boxes are checked. It uses standard chiclet-style islanded keys. 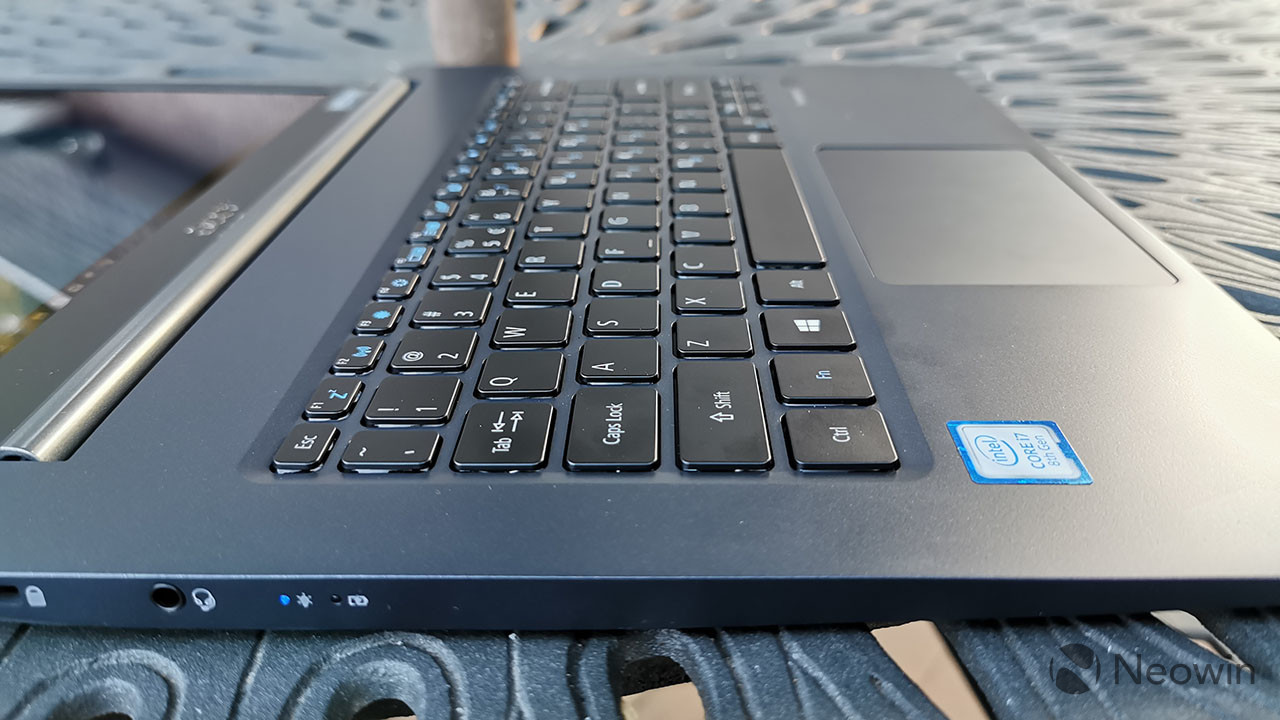 Typing on this laptop does take a little bit of getting used to. Like I said, it's pretty shallow, and it doesn't seem like a lot of effort was put into adding extra resistance to the keys, something that helps in shallow keyboards. 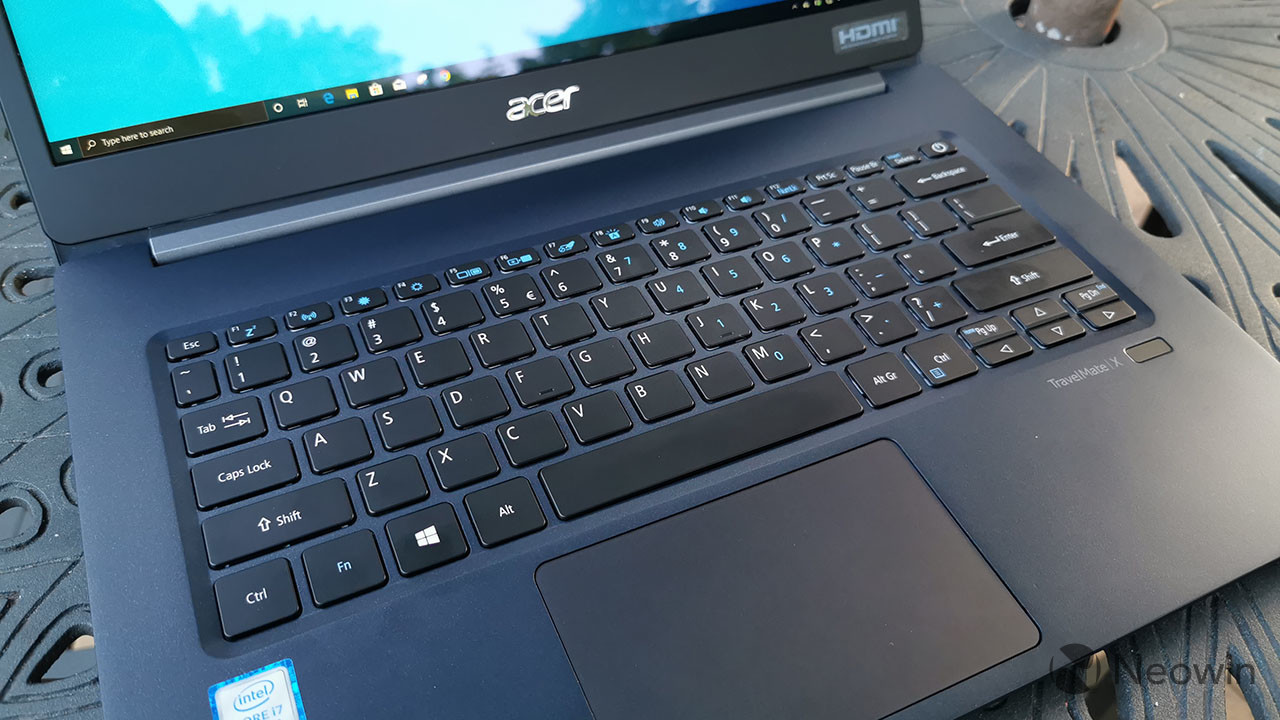 I'd say that it's not the most comfortable keyboard to use, but it is accurate. The size of the keys and the size of the keyboard are just right, so that's not one of the things that you'll have to get used to. For professionals moving between this laptop and a separate desktop keyboard, you won't have to worry about confusing your muscle memory going between the two, something that I've found to be a problem on shallow keyboards like the MagLev one on the Dell XPS 15 2-in-1. 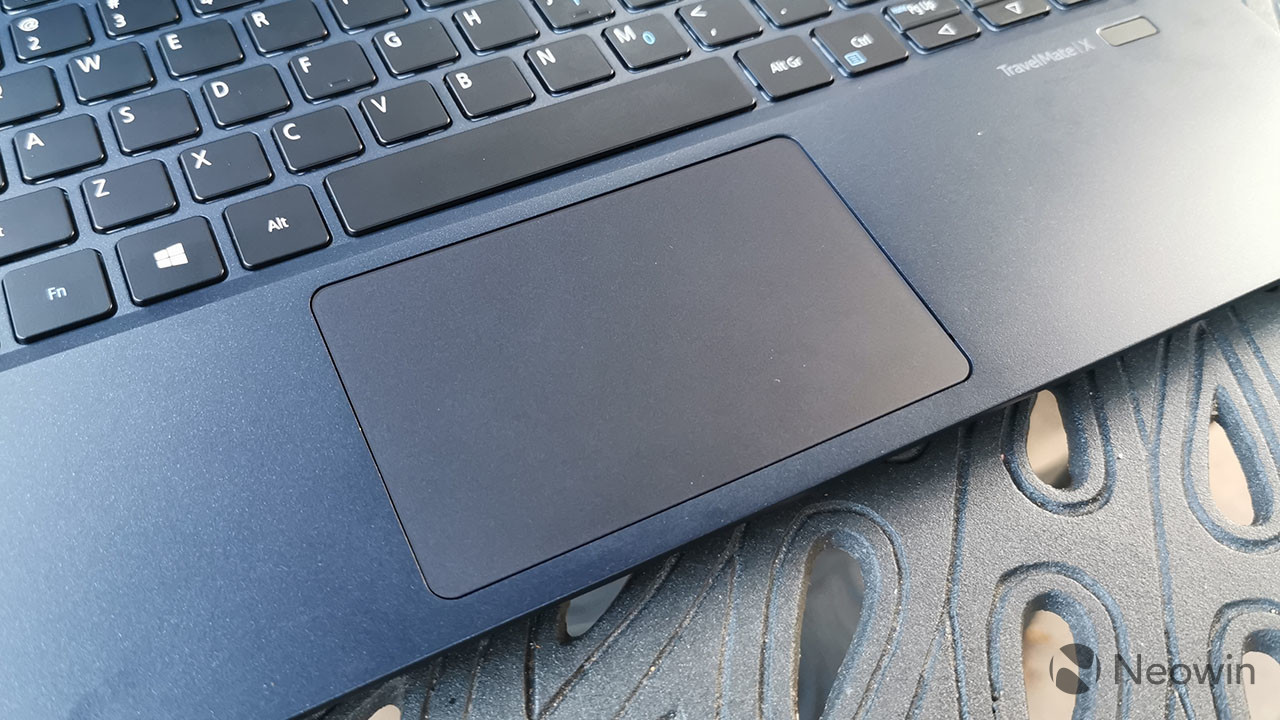 The trackpad uses Microsoft Precision drivers, as all trackpads should. That means that the performance is great and it does support all of the gestures that you're used to. It's not particularly large, but it does take advantage of the space provided below the keyboard. 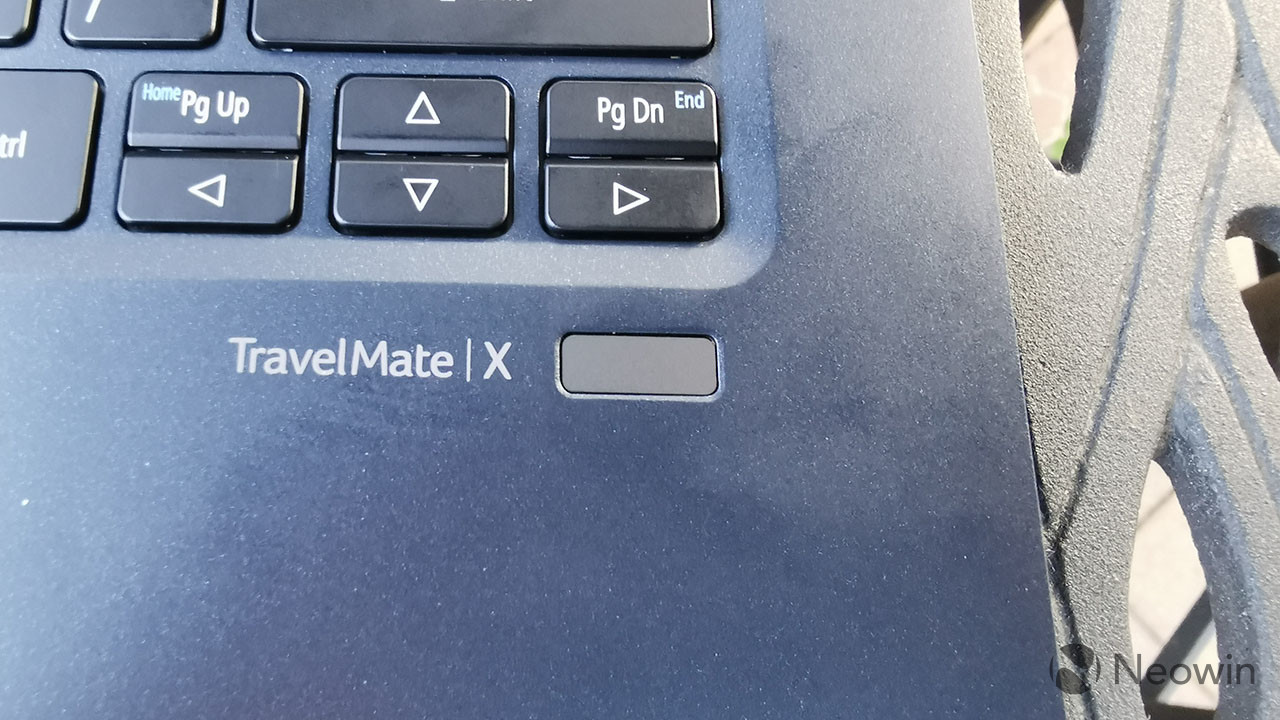 To the bottom-right of the keyboard, there's a rectangular fingerprint sensor. While it looks like the type of thing that you'd have to swipe, it's not. It works just like any other fingerprint scanner that you can place your finger on. It works well, and it better, since there's no IR camera for Windows Hello on this machine. Similar to the one on the Swift 3, I didn't have any false negatives and it was fast enough.

ProShield and other software

Acer's security suite on the TravelMate X514-51 is called ProShield, and it's pretty cool. It allows you to create your own protected drive, that you can 'open' and 'close' as needed. Once you choose to close the drive, it disappears from the File Manager. 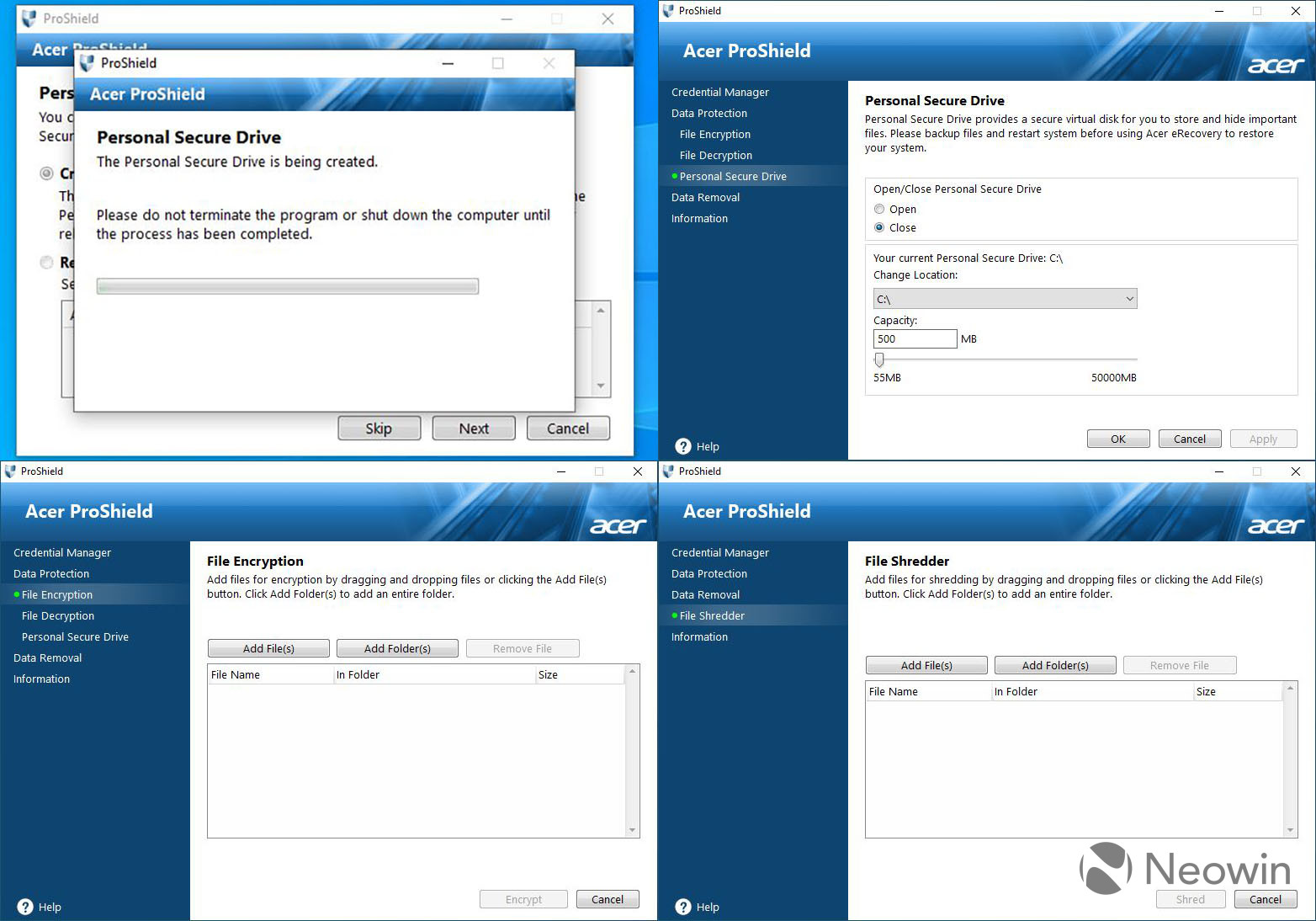 You can do other things as well. You can drag and drop files for them to be encrypted, or do the same to decrypt the files. There's also a File Shredder function to destroy your files, so they can't be recovered. Obviously, the app is protected by a password that you create.

Now for the other software part, which shouldn't be an issue on business laptops. In fact, this is the first commercial PC that I've seen in recent years with OEM bloatware. It comes with Norton antivirus software, Firefox, Evernote, and more. Antivirus is sadly common on consumer laptops, but not on business machines. In fact, I find McAfee antivirus on every consumer PC from Lenovo, HP, and Dell, but not on any of their business PCs.

Things like Firefox and Evernote are annoying, because they're competing with the first-party software that there already is like Edge and OneNote. In fact, Acer even has a game called Simple Solitaire, competing with a game that I already don't want, Microsoft Solitaire Collection.

This could be an issue for businesses, given that these machines are going to be configured and managed by IT. Having to remove all of the pre-installed bloatware is just more work. I've seen all of this stuff on Acer's consumer PCs, which is bad enough, but seeing it on a commercial PC just shocked me.

As I mentioned earlier, the Acer TravelMate X514-51 comes with an Intel Core i7-8565U, 16GB RAM, and a 512GB SSD. This was a big relief. When Acer first offered to send the TravelMate to me, my mind immediately drew the parallel to the Swift 7, which uses a Core i7-8500Y, a CPU that would have been known as a Core m7 in previous years. Moreover, the documentation Acer gave me said that this had an 8500Y as well, so I was pleasantly surprised to find a U-series CPU under the hood.

U-series CPUs are standard for ultrabooks and convertibles, which means that the performance here is as good as anything else. The Core i7-8565U is a quad-core chip with eight threads and a 15W TDP. It's fantastic for productivity tasks.

You can use it for things like some light video editing or gaming, but if that's your primary use case, then you probably already know that you need something with dedicated graphics. For productivity work like Office or working in the browser with multiple tabs open, it's great. It has 16GB RAM too, so it won't choke up with multiple apps open like OneNote, Skype, Slack, and more.

As far as battery life goes, it's just OK. Acer says it gets up to nine hours, which isn't even a bold claim and is probably based on local video playback. Streaming video, I was able to get between six and a half to seven hours out of it. In real-world usage, I got about five hours, which is fine. It's not good, but it's also not bad.

Like I said earlier, it comes with a 45W barrel charger, but you can use USB Type-C to charge. I used a 65W charger that I had lying around this whole time.

The score is right around where you'd expect for a machine with these specs, including the i7, 16GB RAM, and an FHD display. Next up is the Creative test, which checks GPU-intensive tasks like video editing and mainstream gaming.

This score was just a bit lower than I'd have expected. Finally, the Work test checks productivity-related tasks like writing and spreadsheets.

As you can see, the TravelMate beat 87% of other scores. While you certainly won't be complaining about its productivity chops, I'd have expected that to be closer to 90%. I also ran the all-in-one test in PCMark 10 for those that like to keep score. 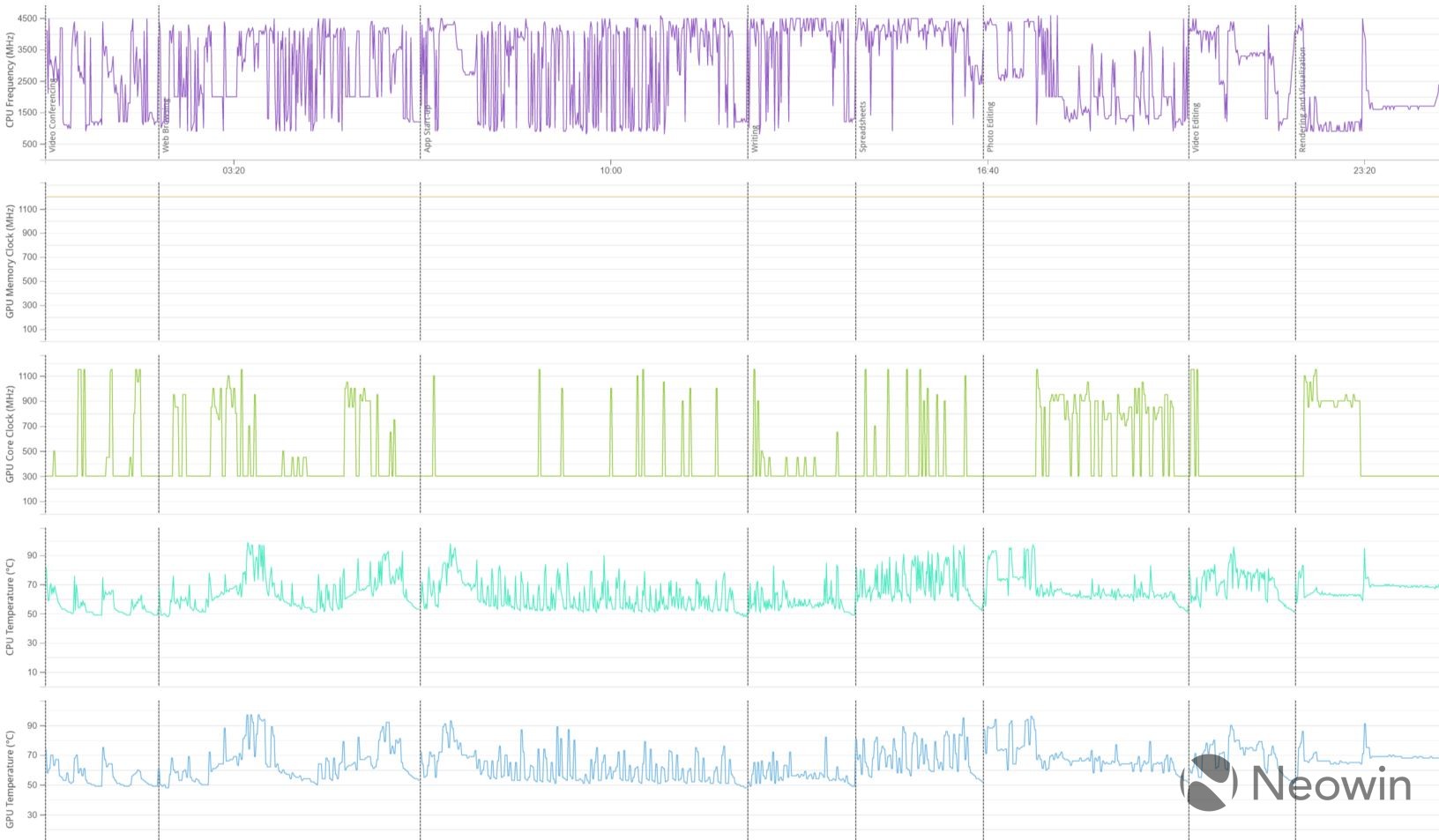 Priced at $1,399.99, I'd say that this is a laptop that plays to a specific use case. What you have to want is the lightest commercial laptop around that doesn't compromise on performance. 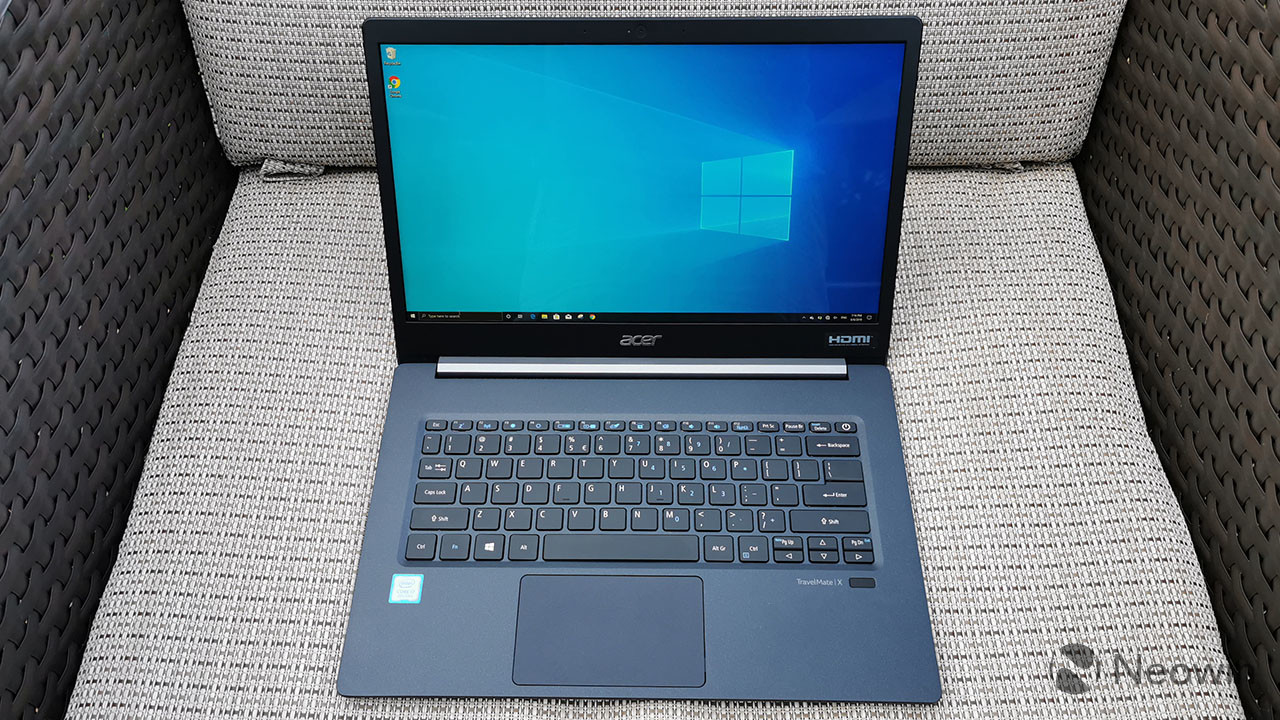 The biggest issue with it that I see is that for that price, you can find a commercial laptop with a better keyboard, a flashier design, and better audio quality. In fact, HP is doing incredible things with its EliteBook lineup, which is pretty much all built out of aluminum these days.

But aluminum is heavy, which is why you should be in the market for something light if you get the TravelMate X514-51. It also has a nice display, even if it's nothing mind-blowing, and I do enjoy the ProShield features. The ability to have a separate drive that I can make disappear whenever I want is kind of cool.

This is a good laptop, for both consumers and professionals. However, if you're going to choose it over something else at a similar price point, one of the reasons that you're buying it should certainly be that it only weighs 2.16 pounds.