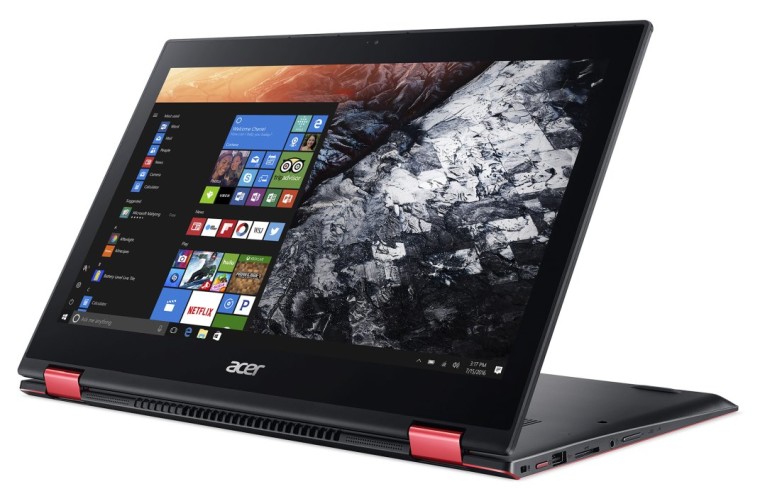 Earlier today, Intel unveiled its 8th-generation processor family, which offers up to 40% better performance compared to the previous generation. The first chips that were announced are four 15W U-series mobile processors with four cores and eight threads, intended for laptops and Ultrabooks.

As expected, the first products based around the new CPUs are coming to light, with Acer being one of the first OEMs to take the plunge with the Nitro 5 Spin, a 2-in-1 version of the company’s Nitro 5 gaming laptop. According to the company, the new convertible is being marketed to casual gamers, with Acer saying it is a perfect fit for multiplayer online battle arena (MOBA) games.

“With a convertible design that features four modes, the Acer Nitro 5 Spin is a versatile gaming device that opens up exciting new usage scenarios for casual gamers on the go. Power users will also appreciate the great performance and battery life of the Nitro 5 Spin, while enjoying the superb visuals and immersive audio that it delivers.”

The all-aluminum device can be configured up to an Intel Core i7 8th-gen processor backed by Nvidia's GeForce GTX 1050 graphics card and a 512GB PCIe SSD. Its 15.6-inch 1920 x 1080 IPS display can be positioned multiple ways depending on your workload, as the hinge rotates 360 degrees. Acer claims that the Nitro 5 Spin offers up to 10 hours of battery life.

The company did not mention anything about the device's memory capacity, but we do know that the new convertible will feature 802.11ac Wi-Fi with Acer’s omni-directional ExoAmp Antenna and MU-MIMO wireless technology. On the sound front, the notebook comes with dual, front-facing speakers and one subwoofer. Other notable points include a backlit keyboard and an integrated fingerprint reader that supports Windows Hello for secure and fast authentication.

Full specifications and available configurations of the Acer Nitro 5 Spin are not yet known, but Acer says that the gaming 2-in-1 will be available in October with a starting price of $999 in the US and €1,199 in Europe.