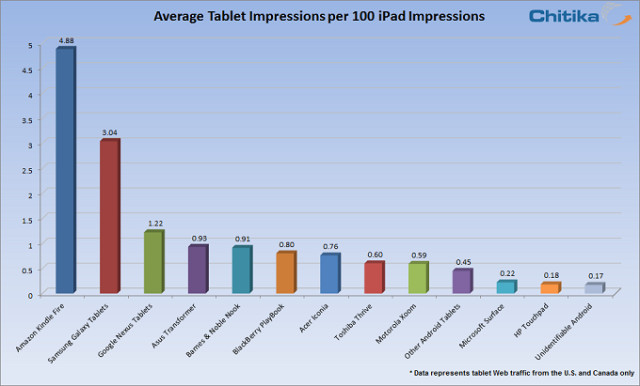 The Surface tablet from Microsoft has been on sale for about two months but it still has a long way to go before it becomes a major force in that market. A new report from the Chitika Ad network shows the Windows RT version ranking near the bottom of their list in terms of ad impressions generated on the network.

The data comes from what the company calls "tens of millions" of ad impressions from the network generated by tablets in the US and Canada from December 8th to December 14th. Apple's iPad continues to dominate the tablet market, so the rest of the tablets in the chart above are based on their rankings per 100 iPad impressions.

The Surface is well behind most other tablets, with the ad network only recording 0.22 impressions per 100 iPad impressions for the mid-December time period. Indeed, the only other tablets that were lower than the Surface were the discontinued HP TouchPad and "unidentified" Android-based tablets.

However, those stats may change in the near future, as data comes in for Christmas week, during which a lot of new tablets will be given out to loved ones. Chitika admits that all those new tablet gifts will "impact usage figures" and they plan to release an update when those numbers come in.