In the past couple of years, we have seen TV companies release new "smart TVs" that add WiFi and Ethernet ports that allow these TVs to connect to a home Internet network. These TVs have tons of features such as web browsers, Facebook apps, games and more. Google has been trying to push its Google TV OS to TV and set-top makers for the past couple of years, with limited success. 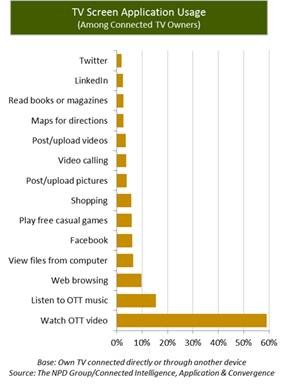 Today, the NPD Group released the results of a new survey and they don't look good for "smart TVs". They show that the only really popular feature of these televisions is being able to watch video from streaming video services such as Netflix and Hulu Plus. The survey shows that close to 60 smart TV owners use them for this feature.

After that, the results show much less use for any other feature. Streaming services like Pandora is used about 15 percent by smart TV owners and web browsing on the TV is only done by 10 percent of those owners. Other Internet features such as shopping, using Facebook or playing games are in the single digits in the survey results.

The message is clear; aside from watching Netflix and (maybe) Pandora; TV owners have little interest in using their big screen TV as an Internet portal, even when given the option to do so. NPD states:

To counter this, OEMs and retailers need to focus less on new innovation in this space and more on simplification of the user experience and messaging if they want to drive additional, and new, behaviors on the TV.