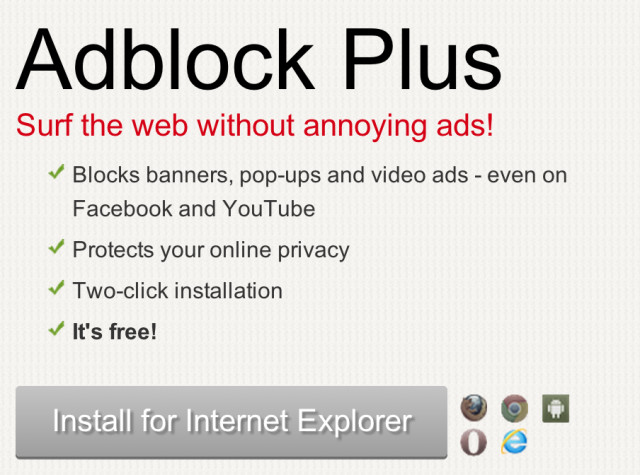 One of the most popular browser add-ons for Chrome and Firefox is Adblock Plus and up until today, it was not available for Internet Explorer. But, that all changes as Adblock Plus has announced that they are now supporting the IE browser.

If you are not familiar with Adblock Plus, as the name implies, the plug-in blocks advertisements from displaying on the websites that you visit. It’s as simple as that; no more ads, period. Although, Google and others reportedly paid Adblock Plus to unblock some advertisements as Google, no doubt, makes the majority of its income through display advertisements across the web and with Adblock Plus being widely used, it made sense for them to try and stuff the coffers to have their adverts shown.

The team behind the product said that it took them six months to build out the IE iteration of the plug-in and for those of us who have been waiting, it’s hard work that will not go unnoticed.

With that being said, many websites, including Neowin, depend on advertising revenue to keep the news and forums running. So, if you do use the block and would like to support Neowin, you can either whitelist Neowin or check out our subscription options that hide all of our advertisements natively.