A backyard astronomer has discovered that Jupiter was recently impacted by an asteroid or a comet leaving a large mark on the surface of the planet. On July 19th Anthony Wesley was photographing Jupiter's big red spot when something of interest entered his field of view.

He was initially unsure of what the large black spot may have been, but when remembering what the impacts from the Comet Shoemaker-Levy 9 hitting Jupiter in 1994 looked like, it was clear that it was an impact site.

The impact occurred on the dark side of the planet and did not become known to humans until Anthony's discovering. Even NASA was perplexed as it was not expecting an impact on the large gas giant and took pictures using Hubble even though it was still finishing up some testing after its most recent service mission.

"Simon-Miller estimated that the diameter of the object that slammed into Jupiter was at least twice the size of several football fields. The force of the explosion on Jupiter was thousands of times more powerful than the suspected comet or asteroid that exploded over the Tunguska River Valley in Siberia in June 1908"

An event like this is usually regarded as extremely rare but considering the last major impact in the known universe was 14 years ago it shows that these impacts are not as rare as once thought. 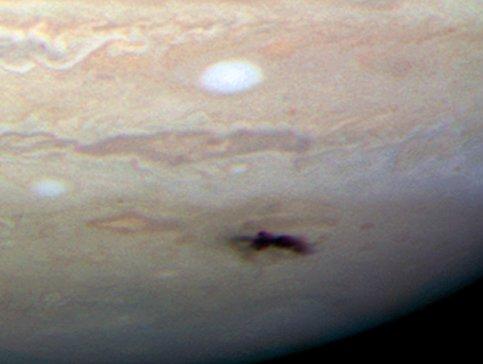