Amazfit announced a couple of new smartwatches at this year's CES, the GTS 2e and GTR 2e. In terms of specs and features, these are nearly identical products, but the former has a rectangular display (the S stands for "square"), and the GTR 2e is round - you can probably guess what the R stands for.

I already reviewed the Amazfit GTS 2e a few days ago, and because a lot of the things I said there also apply here, I'll avoid repeating myself as much as possible. The GTR 2e's form factor does bring some notable differences, though, and in my opinion, they make this the better product, even if it is a missed opportunity in some ways.

Like I said in my review of the GTS 2e, the design is the most easily appreciable quality of a smartwatch because watches are fashion pieces. Both the GTS 2e and GTR 2e are sleek and stylish smartwatches, with a nice matte finish on the aluminum frame, a plastic back, and a slightly curved display cover that feels really nice to the touch. The GTR 2e specifically is the sleekest round smartwatch I've had the chance to review, and it's surprisingly comfortable for how big the display is. Amazfit sent me the Slate Grey version of this watch which uses a light grey body and a grey strap, but you can also get it in Obsidian Black like the GTS 2e, or in Matcha Green. 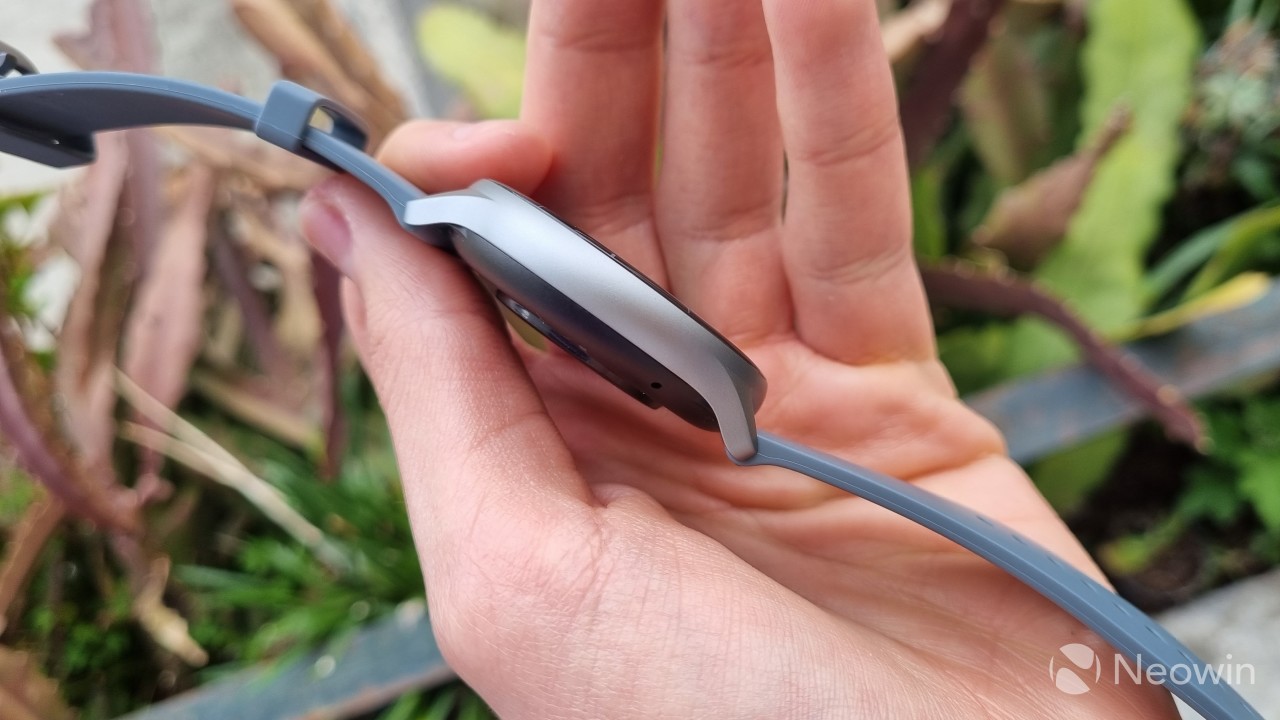 Just like its square counterpart, the GTR 2e uses a standard strap mechanism, so you can easily pick out another strap if you don't like the included rubber one. It uses a 22mm fitting, though, which is larger than the one on the GTS 2e. 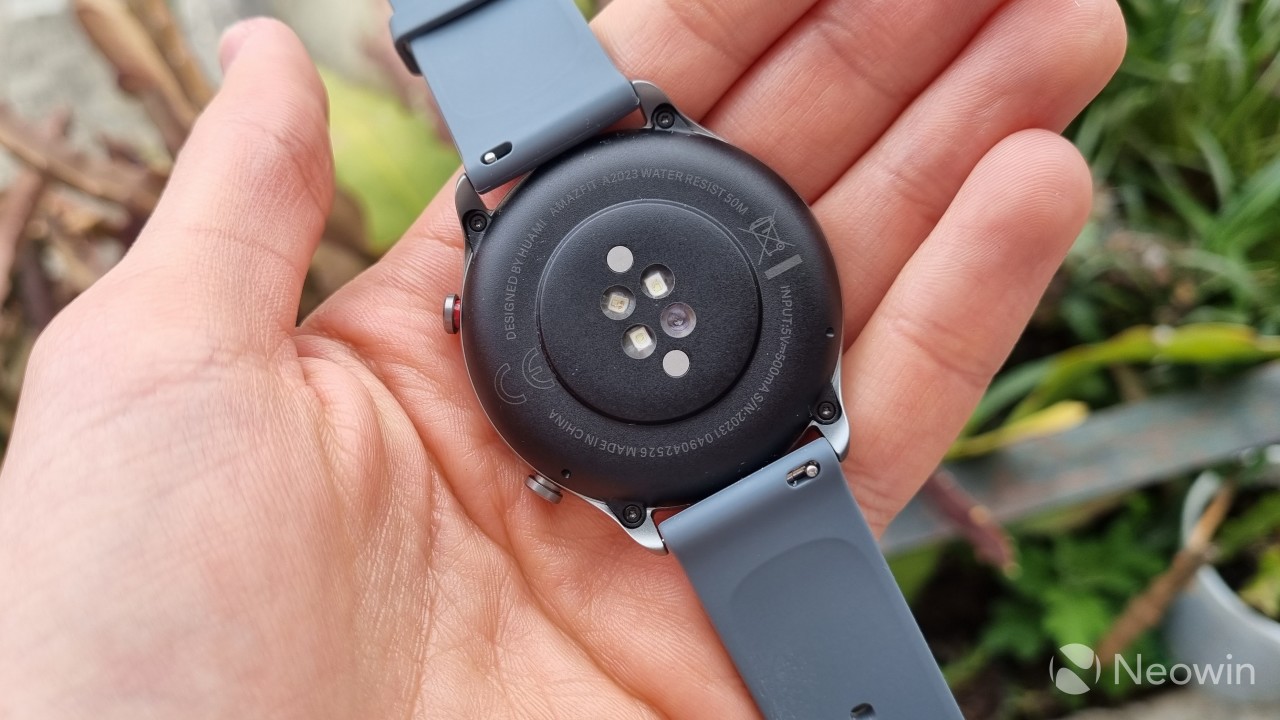 The round form factor has two buttons instead of one, which helps the design feel a bit more balanced, but the way the buttons are built feels a bit less thought-through than it did on the GTS 2e. The body of that watch curved around the button, making it feel a bit more seamless, but the buttons here stick out a bit more. 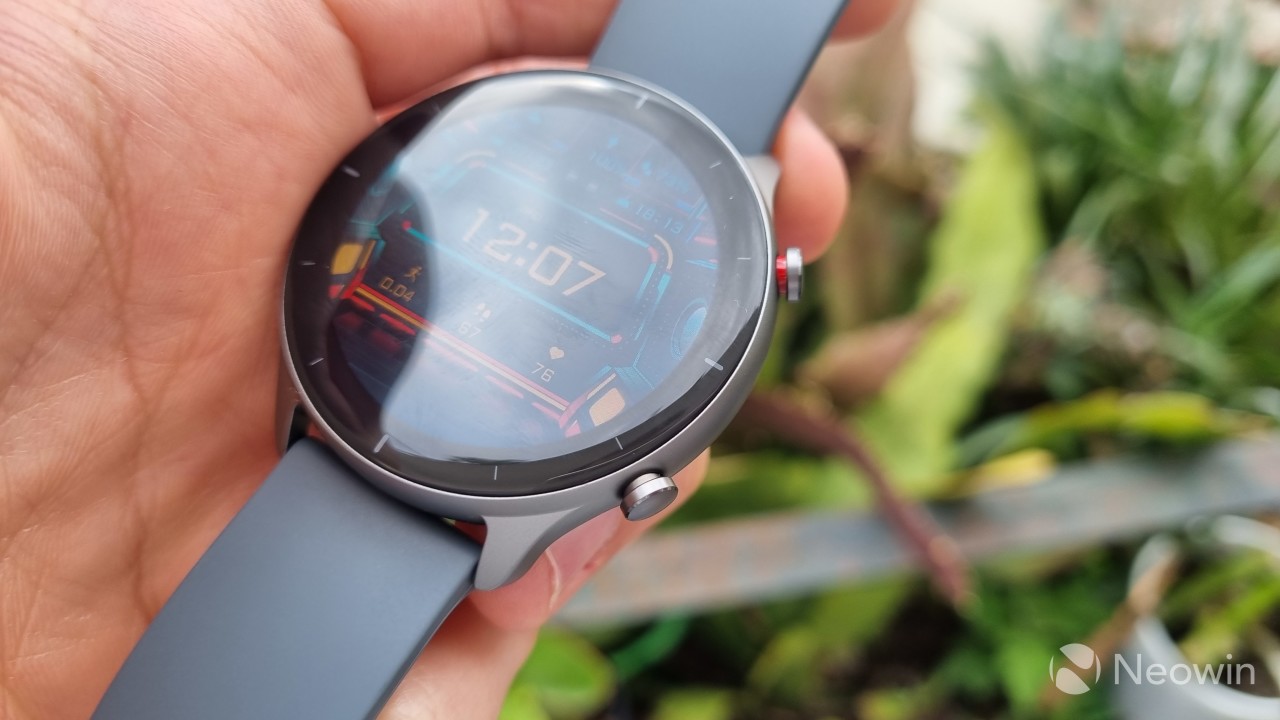 I also feel like Amazfit wasted an opportunity here because, while the GTS 2e had a double-press shortcut for its button, the extra button here just means that shortcut now has its own button. You can't double press either of the buttons on the GTR 2e, so there's no functionality added by having two.

Of course, being that the watch is round, so is the display, which is a 1.39-inch AMOLED panel with a resolution of 454 pixels across - it's the same no matter how you measure it since it's a circle. It has the usual benefits of AMOLED displays, including true blacks and vivid colors - which look great - and it helps save battery since black pixels can be turned off entirely. There is a bit of image retention of the brighter parts of the screen for a few seconds, but no permanent burn-in so far. 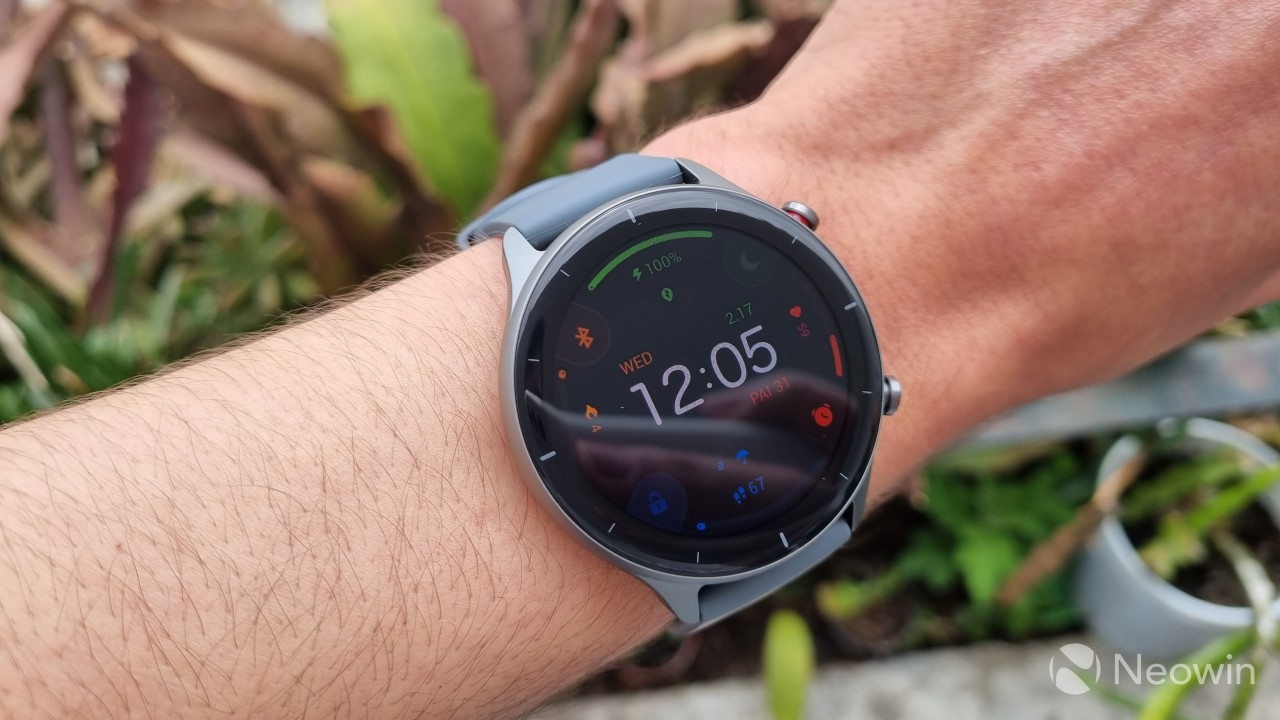 While the 1.39-inch display may sound like it's smaller than the 1.65-inch panel on the GTS 2e, it's important to know that these are diagonal measurements. Neither the height nor width of the GTS 2e are 1.65 inches, but on a round watch, it's 1.39 inches in all directions, and because of that, the display area feels much bigger. 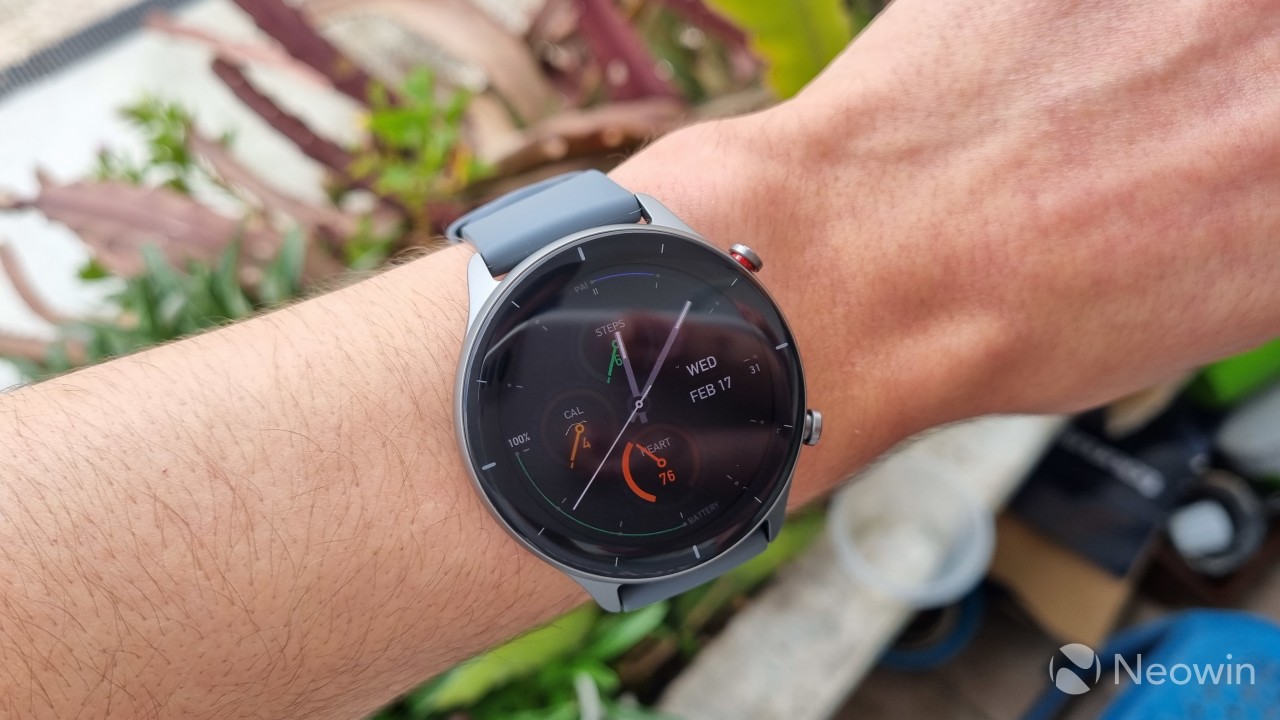 You may have noticed that the bezel around the display has a clock dial, which makes sense if you're using an analog watch face. It tries to make it feel like the bezel is part of the screen, which mostly works. When it gets darker around you, the display will be much more visible than the dial on the bezel, but in daylight, it's pretty neat.

The Amazfit GTR 2e has all the same software and health features as its rectangular sibling, including heart rate and stress monitoring, sleep tracking, SpO2 measurements, workout tracking with 92 sports modes, and a temperature sensor that isn't all that useful. It also has the PAI measurement, which gives you an overview of your fitness level and summarizes it in a single number.

All of that information goes into the Zepp app on your phone, which offers plenty of nice-looking graphs and cards to summarize your health data. The app also makes it really easy to have more than one device synced, so switching from the GTS 2e to the GTR 2e wasn't much of a hassle. 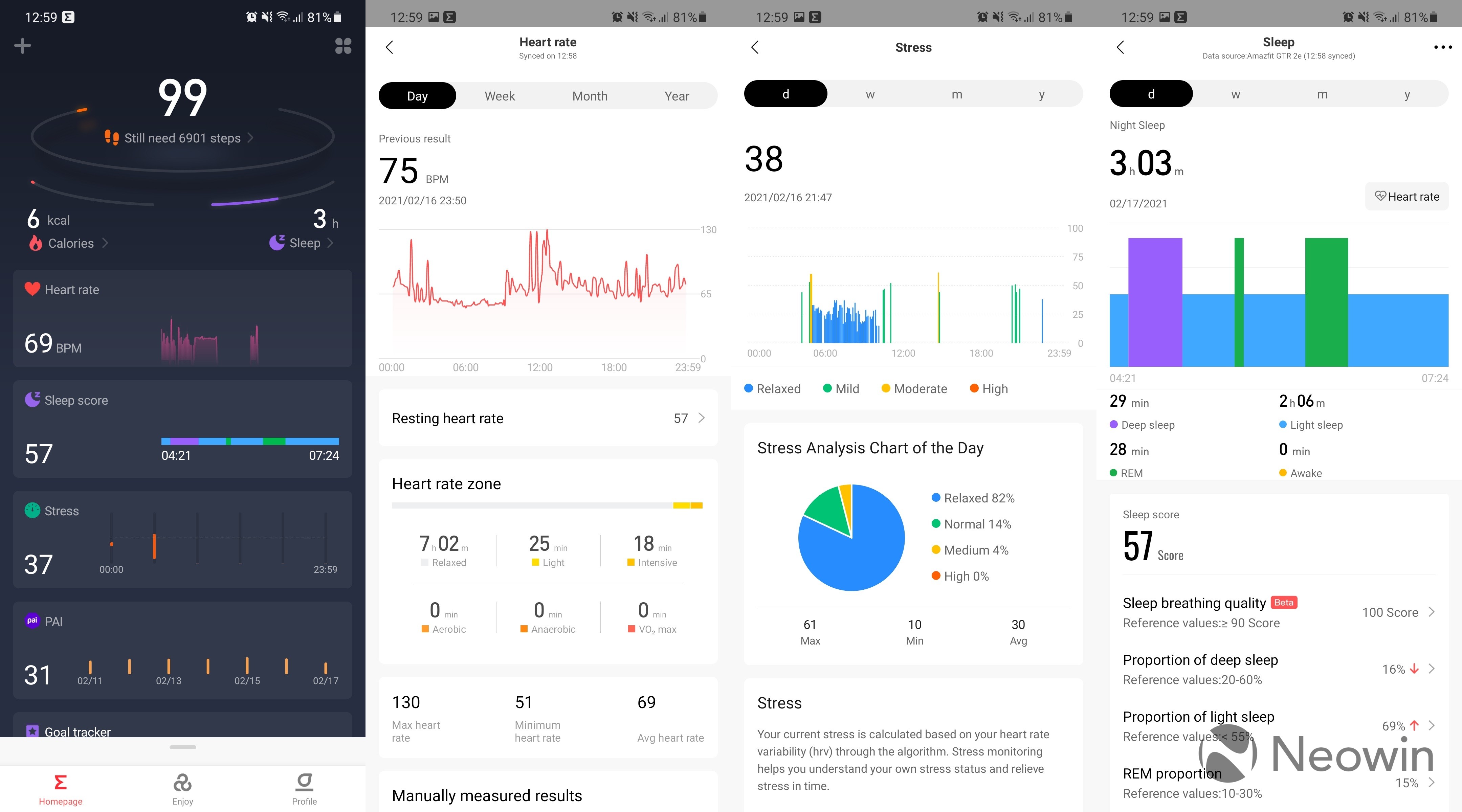 The app list is exactly the same as before, and many of the apps can be added as widgets to the sides of the watch face. There's also a shortcuts page on the left of the watch face, which shows a series of cards with quick glanceable information from each app. Here's the full list of apps:

Some things have been slightly tweaked to accommodate the round form factor, though. There are many different watch faces that make better use of the round display, for starters, and just like before, you can customize a few of them by changing the complications on them to show different information. But other elements of the way are also clearly designed to work better with round displays, so things like the heart rate monitor, PAI indicator, and weather app make much better use of the space available. 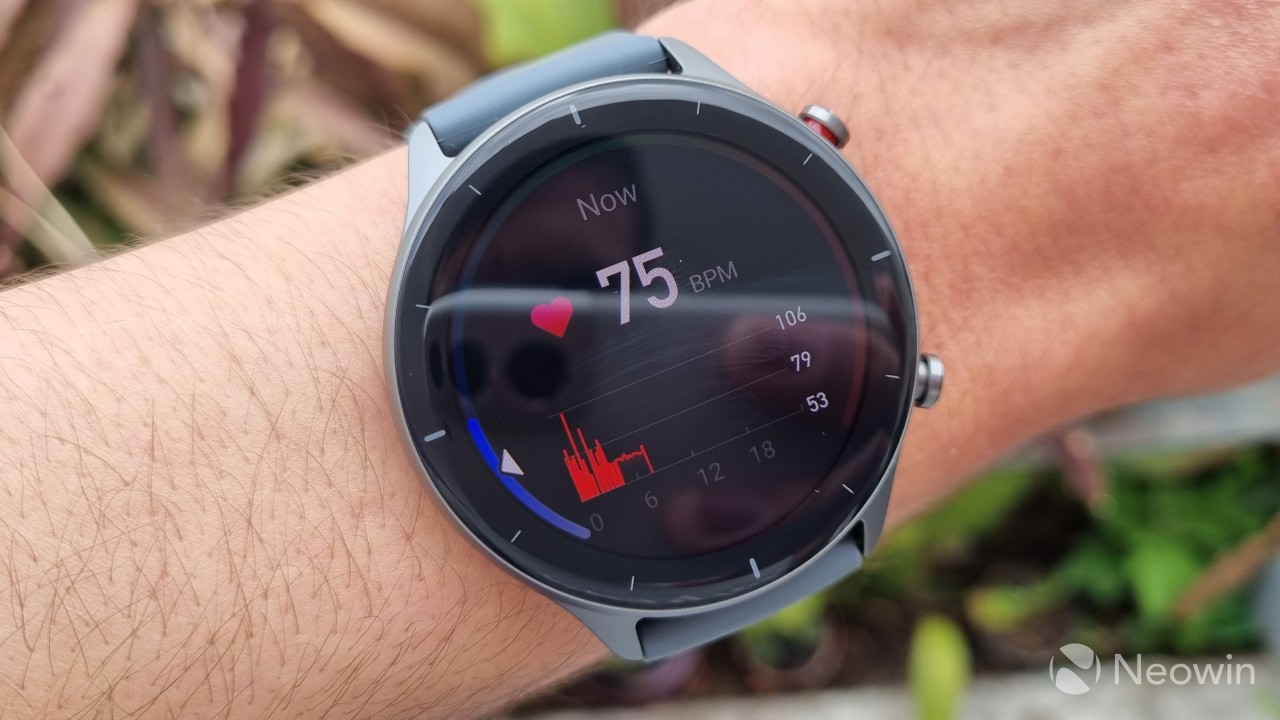 Other things aren't adapted as well, though. The card format in the shortcut and notification pages doesn't feel quite as natural with corners being cut off, and some buttons don't fit as well on this display, though they're still usable. The same can be said for the quick settings panel, which is now split into two pages, but the second page only has one button. 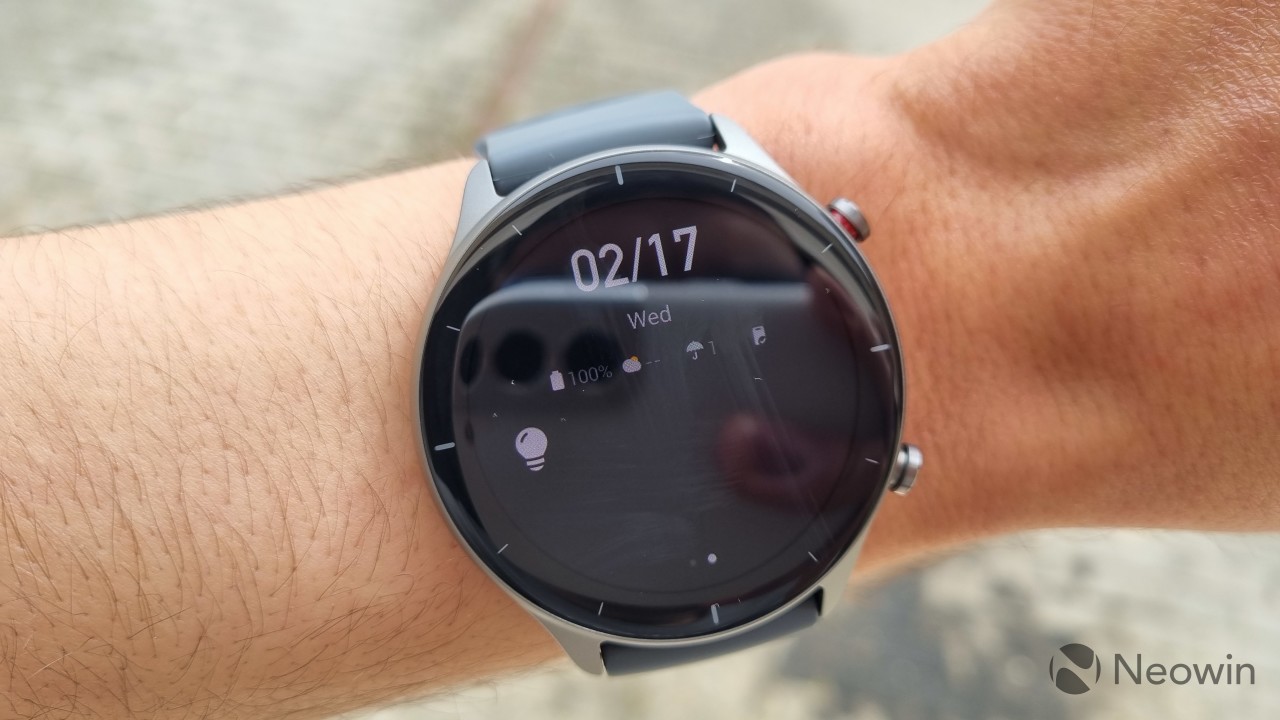 All the issues I had with the GTS 2e in terms of software are still here, though. Workouts don't sync with Google Fit properly, weather information doesn't sync to the watch automatically, stress levels aren't recorded consistently, and more. I already went on and on about all the little issues I have with the software, so I'll direct you to my GTS 2e review to see all about them. I had hoped there would be a firmware update during the review period to address at least some of these problems, but they're all the same here. There's one more to add, though, because switching watches revealed that my PAI number didn't roam properly across devices.

The biggest difference between this round watch and its square sibling is the battery size, and as a result, the battery life. The Amazfit GTS 2e has a 246mAh battery, but the GTR 2e boosts that to a whopping 471mAh, and it promises up to 24 days of typical usage or 12 days of heavy usage.

I first charged the watch to 100% and unplugged it on February 6, and it lasted me through the end of February 16, which adds up to 11 days. I used all the same settings as I did with the GTS 2e, and the result relative to Amazfit's promises is also very similar, so that's not too surprising. But this is a super sleek smartwatch - the most comfortable round watch I've reviewed so far, really - and it still has the best battery life. The Honor Watch GS Pro had a similar result, but it's a bulky device by comparison, and much more expensive, too. 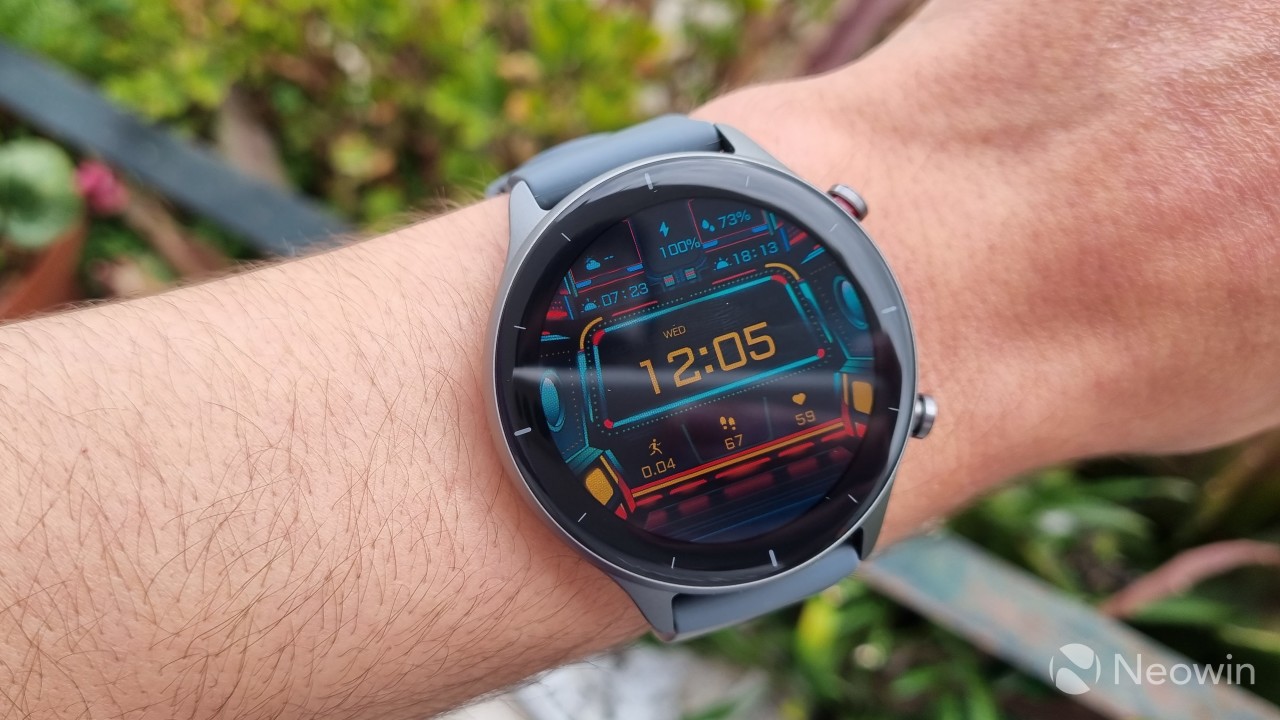 As for performance, just like with the GTR 2e, there isn't a lot that can be said for a watch that's very focused on a specific feature set. Everything works smoothly here, and opening the menu is actually a bit faster here compared to the GTS 2e. That's likely because the GTS 2e allows you to press the side button twice for a shortcut, so it has to wait a split second before realizing you're not going to press the button again.

Like its square sibling, the Amazfit GTR 2e is a smartwatch with incredible potential. The stylish design - while not as good as the GTS 2e's, in my opinion - makes way for a bigger screen and is still super comfortable among round watches. It has lots of health tracking features and capable software that runs pretty smoothly, many watch faces to choose from, and it's overall just nice to use. 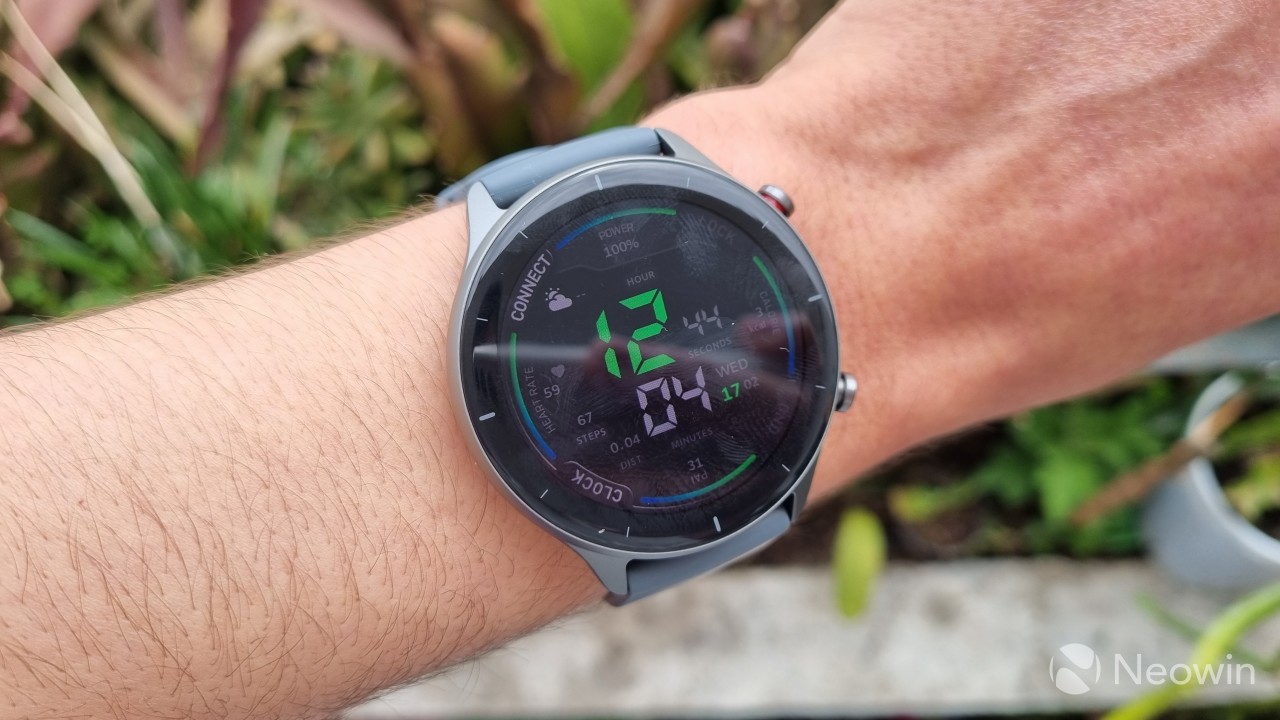 On top of that, the GTR 2e takes the already great battery life of its smaller brother and turns it up to 11. It's actually incredible to me that such a light and comfortable watch can last so long while offering all the features it does, and it's definitely one you'll want to carry if you don't want to constantly worry about charging it.

However, all the issues I had with the GTS 2e are still a problem here, and it makes it a lot harder to wholeheartedly recommend this watch. It's frustrating because all these seem like issues you could easily fix with a software update, so there's potential for this to be a great fitness smartwatch, but there are a few too many problems. 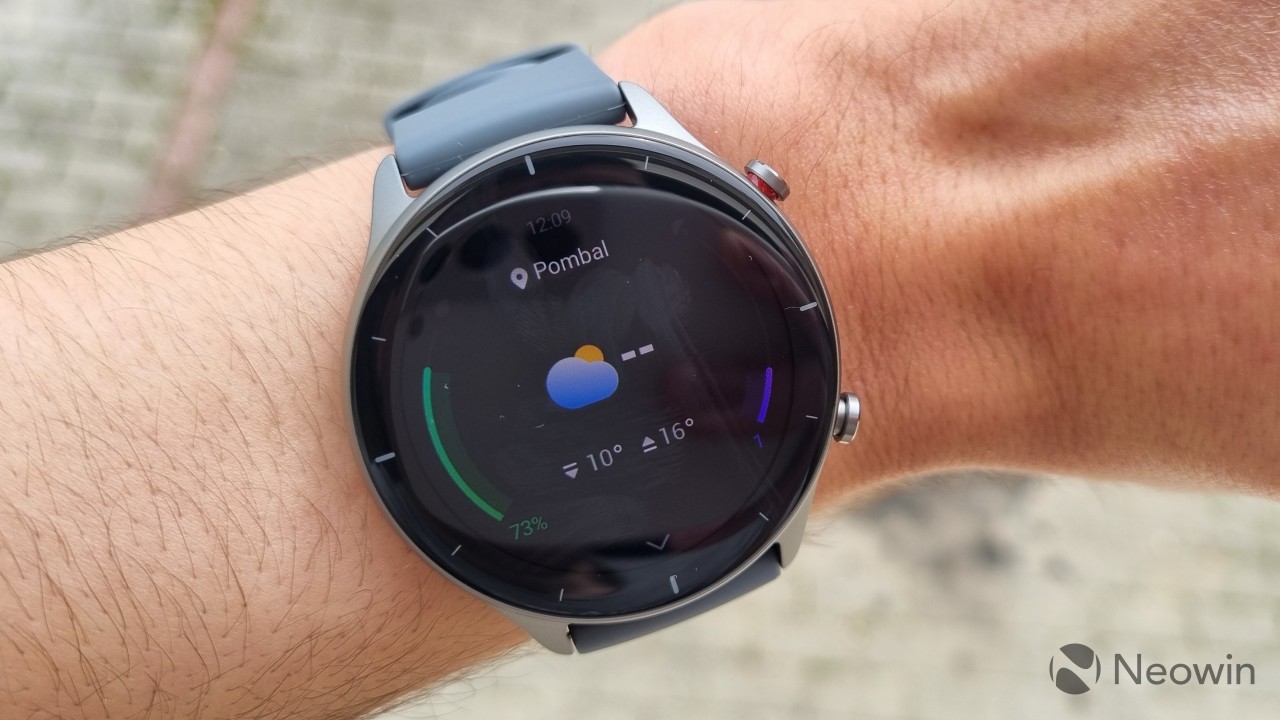 As it stands, it's a very good-looking and sleek watch with incredible battery life and pretty much all the health features you'd expect out of a smartwatch, but you have to deal with some painful software choices to enjoy it. If you know what you're getting into, you can get the Amazfit GTR 2e on Amazon, where it's currently discounted to $124.99 (usually $139.99). In the UK, you can have it for £119.99.

If you'd like to read more about the software experience, you can read our review of the Amazfit GTS 2e, which has all the same features. We took a deeper dive into that side of things in that article and omitted them here to avoid repetition.