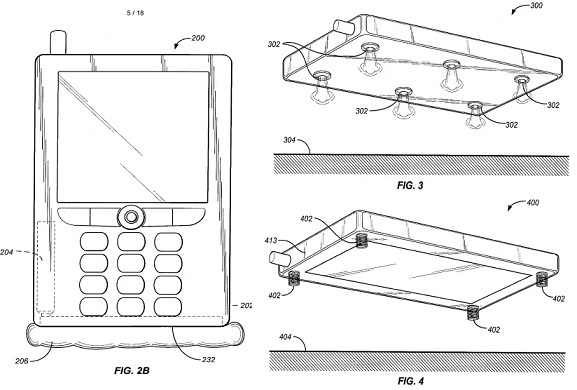 Owning a smartphone can give users a great sense of security. After all, having such a phone allows anyone to get in touch with anyone else and vise versa. But a lot of us have had to deal with phones that fly out of our hands or drop to the floor. The usual result is a phone that may or may not work afterward. But what if your phone could sense it was in danger of having a large impact and could take steps to prevent a lot of damage?

Amazon CEO Jeff Bezos has apparently been thinking about such a situation. As reported by GeekWire, Bezos is the co-author of a new patent that presents a "method for protecting devices from impact damage.” The idea is for a device such as a smartphone to have some kind of sensors that would be able to detect a device's motion and its distance from other objects. It should also be able to sense if a device's motion will bring it in collision with another object.

The patent shows how one or more small airbags might be installed in a portable device. The airbags would be deployed if the sensors detect a risk of damage to the phone. The patent also suggests that springs or jets of small gas might be used as an alternate to the airbags. It does sound a little nuts and we have to wonder how these kinds of sensors would really work and how much it would add to the cost of a smartphone to have this kind of technology installed.