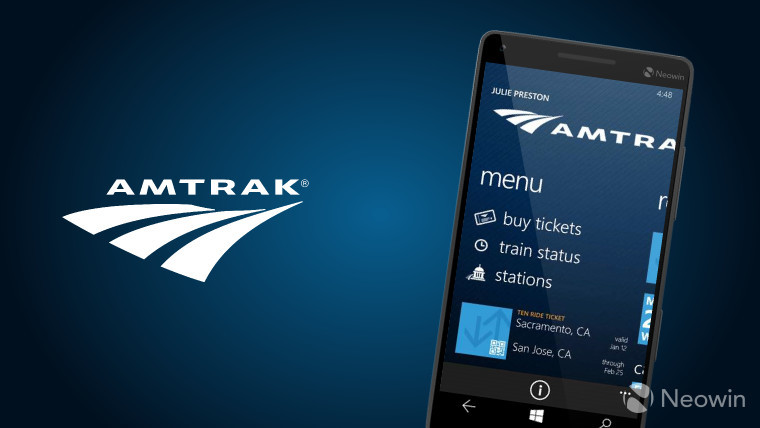 In November 2013, in an editorial regarding the 'app-gap' on the Windows Phone platform, we highlighted Amtrak as one of many examples of apps that still hadn't launched on Microsoft's mobile operating system. But just a few weeks later, Amtrak jumped on the Windows Phone train, bringing its app to the OS.

Now, though, the app has reached the end of the line.

As Windows Central reports, Amtrak has circulated an internal memo to its staff informing them that the Windows Phone app is being withdrawn with immediate effect. The memo explains:

The app will be removed from the Microsoft Marketplace on Saturday, August 13, 2016 and server support disabled on Sunday, August 14, 2016. Customers using Windows Phones who attempt to use the app to check train status, search for available tickets or login to their accounts will receive a message informing them that support has ended and to visit Amtak.com (accessible through the browser on the phone). All functionality available through the app is available through the mobile version of Amtrak.com.

The iPhone and Android versions of the mobile app will of course continue to be supported.

As the company notes, the app - which worked on Windows Phone 8 / 8.1 and Windows 10 Mobile devices - suffered from extremely limited use, among less than 1% of its customers.

The mobile-focused nature of the app - offering e-ticket support, allowing users to find nearby stations and information, and providing up-to-the-minute train status on-the-go - means that there's little motivation for Amtrak to consider developing a new version of the app built on Microsoft's Universal Windows Platform (UWP), particularly when the company offers desktop and mobile sites with equal functionality.

While UWP would allow the company to offer its app on Windows 10 PCs and tablets in addition to phones, the tiny number of Windows 10 Mobile users - and the number of those users traveling on Amtrak - would surely be too small to justify such an effort.

Microsoft's decision to scale back its mobile efforts has left a smartphone 'device gap' in its UWP proposition, which means that developing such apps may not always make sense for some organizations, especially those where mobility is a core part of the user experience. Similarly, a company like Amtrak is unlikely to be swayed by the ability presented by UWP to offer its app on HoloLens or Xbox One.