Earlier this month, Samsung began rolling out the Android 4.3 Jelly Bean update to its Galaxy S3, but two weeks later, it was withdrawn following widespread reports of problems, including freezing, crashes, battery drain and RAM management issues. A week later, numerous problems were reported with the 4.3 update on the newer Galaxy S4 too, with one US carrier reportedly suspending its rollout.

While Samsung is no doubt hard at work resolving these problems, it is also preparing the next update for some of its devices. iTechAddict claims that an unnamed 'insider' at Samsung India's R&D unit leaked an internal document to them, which shows the 'expected release' dates of Android 4.4 'KitKat' for four of the company's high-end handsets. 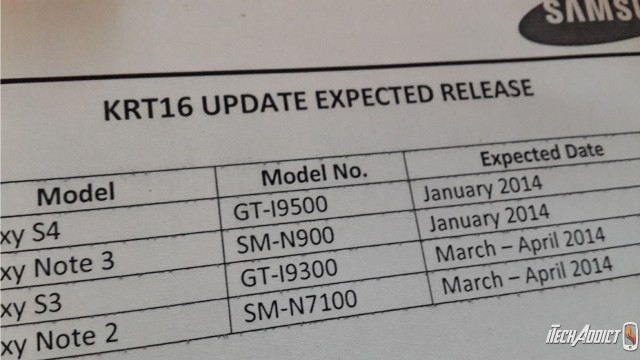 The first devices to get KitKat will be the Galaxy S4 and Note 3, in January 2014. The slightly older Galaxy S3 and Note 2 are expected to receive the 4.4 update a couple of months later, in either March or April.

Last week, HTC revealed that it will make KitKat available for the One from the end of January, while the update has been rolling out to some Nexus devices over the last two weeks too. One device that definitely won't be getting the update, however, is Samsung's Galaxy Nexus. Despite being just two years old, the handset falls outside of Google's 18-month OS support window, and the company has so far not been persuaded to reverse that decision, despite a petition which attracted almost 29,000 signatures.