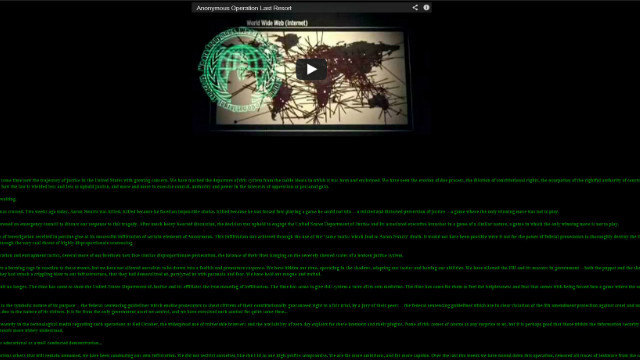 In the wake of the suicide of Internet activist Aaron Swartz earlier this month, it appears that the collective hacker group Anonymous is stepping up its cyber attacks. Soon after Swartz' death, Anonymous claimed responsibility for defacing MIT's website with a tribute to Swartz.

Earlier today, the group also claimed responsibility for defacing the website of the U.S. Sentencing Commission. CNN reports that the website included a lengthy message and a YouTube video after it was hit by the hack, which claimed Anonymous had obtained secret files from the U.S. Justice Department.

Anonymous puts part of the blame for Swartz' suicide on his treatment in the hands of the US justice system, which targeted Swartz after he downloaded millions of academic documents from the JSTOR online resource in 2011, with plans to release them for free to the public. Today, Anonymous claims that the files it took from the Justice Department contain "enough fissile material for multiple warheads," which is obviously a metaphor for some highly sensitive data.

It remains to be seen if this newest cyber attack was just a defacement of another website or if secret files were really obtained by Anonymous. The U.S. Sentencing Commission site is down as of this writing and a FBI representative says they are treating this incident "as a criminal investigation."