Nearly a month ago, Microsoft signed off on the RTM build of Windows 8 with the build number of 9200.16384.win8_rtm.120725-1247. That's the same build number that was offered to early qualified users who were able to download Windows 8 well ahead of its planned and official October 26th launch. Now a known Windows news leak source has posted a screenshot that shows yet another build number for Windows 8. 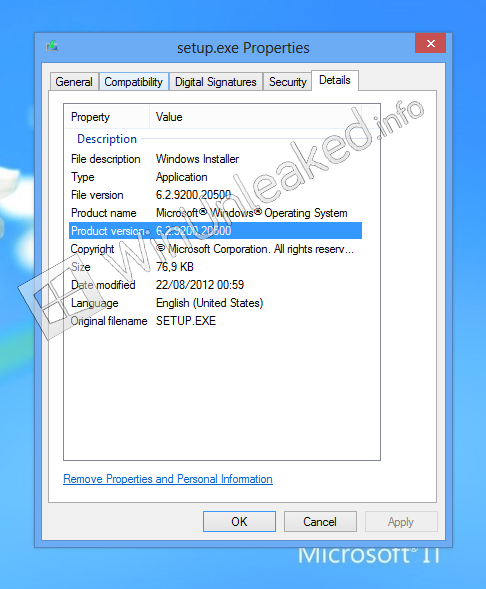 The Winunleaked.info forums (free registration required) is the source of the properties menu screenshot, which seems to show that the newest build number for Windows 8 is now 9200.20500. Previously, another Internet screenshot leak showed that Microsoft had updated the Windows 8 to build number 9200.20495.120814-1420. No other information about this new build was revealed in the leaked screenshot.

Microsoft has yet to comment if the company is working on new builds of Windows 8 beyond the RTM version, although we can assume that is indeed what they are doing. However, it's currently unknown if this new build number revealed means that Microsoft might have some kind of "day one" patch for Windows 8 when the OS is made available to the general public on October 26th.