Apple has added a large number of new text message graphic icons in the upcoming iOS 6, and two of these new icons depict gay and lesbian couples, reports Gizmodo. 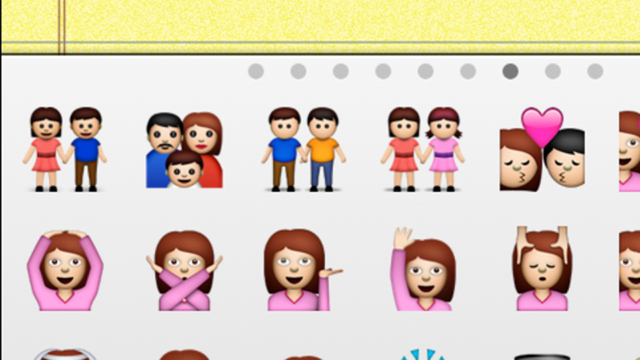 The icons are called emoji, which is Japanese for picture (e-) and letter (-moji). The icons are used in text messages and emails, much like text-based smilies are used to depict facial expressions and emotions in instant message conversations. Emoji are so popular in Japan that the three main Japanese operators, NTT DoCoMo, au, and SoftBank Mobile, all have their own defined emoji standards.

When Apple introduced the iPhone to the Japanese market, they built their own set of emoji into iOS because of their cultural importance. The rest of the world slowly discovered the cute little icons, and users found ways to enable them in iPhones outside of the Japanese region. In iOS 5, Apple officially included a native emoji keyboard, so any user could enable the feature with a simple setting change, instead of having to rely on third-party methods to unlock them.

And now, in iOS 6, which is still in beta, Apple has created a lot of new emoji icons. Of particular note are two new icons that depict gay and lesbian couples. While this is really a very minor addition to a feature that many users outside of Japan won't even be aware of, it's still nice to see even the smallest gestures of social progress.