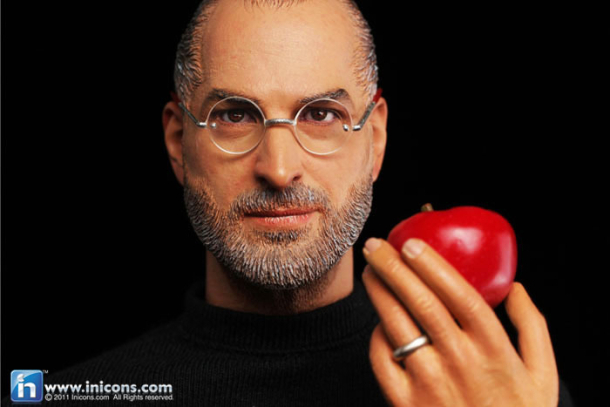 Earlier this week, the Internet was full of stories about a company that was planning to release a highly realistic looking doll (or action figure, if you prefer) of Apple's late co-founder Steve Jobs. The company, In Icons, was taking pre-orders for the 12 inch doll for $99.

In addition to the very accurate look of the doll itself (glasses, turtleneck and more) it also comes with a number of accessories that will be familiar to Apple fans, including a stage backdrop with the phrase "One More Thing" printed on it.

If you have already pre-ordered the Steve Jobs doll, you might get your money back soon. The Telegraph reports that Apple has now sent a cease and desist letter to the China-based In Icons, claiming that the company was not authorized to release such a product. The letter stated that any such toy that uses Jobs' name and appearance or Apple's company logo is a criminal offense.

The story points out that Apple successfully stopped the launch of a previously planned Steve Jobs doll by another company in 2010. So far In Icons' web site has not yet stopped taking pre-orders for the toy.

Image via In Icons