If you have been trying to update to iOS 5 but have been having trouble authenticating your download with Apple, you are not alone. Twitter has been filled with users who can download the update, but then fail to actually install the OS. 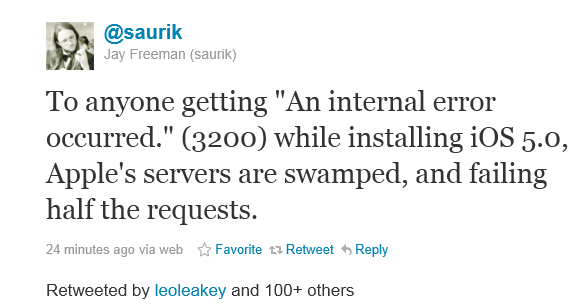 Saurik, the head honcho of the jailbreak community, posted up a tweet about the common error 3200 that most people are receiving. He states that it means that Apple servers over overwhelmed with activity and thus fail the request to authentic to their system.

iOS 5 has been heavily anticipated by many and the overwhelming reaction to the download must have caught Apple off-guard. Despite the fact that they built a new server farm in North Carolina, it would appear that their servers are tapped out at the moment.

The issues will most likely be resolved as the massive influx of activity reduces over time and the servers can begin to cope with the traffic. But as it stands now, how did your update go? Are you stuck, did your device get cleared but now you cant update or did everything go as planned?