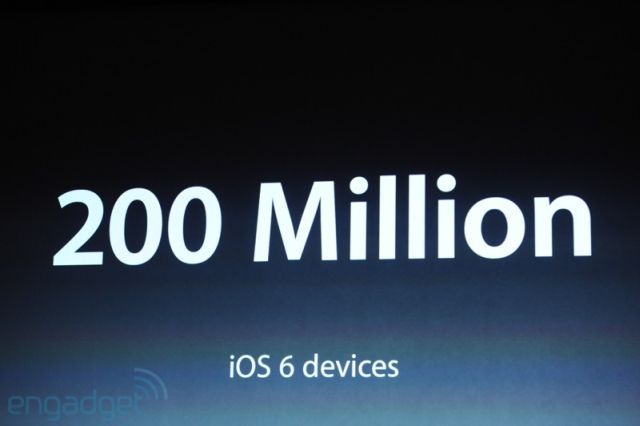 As Apple usually does during its press event, it likes to give out some numbers about its various achievements since their last press conference. Today was no exception as Apple CEO Tim Cook rattled off a bunch of numbers as part of their iPad mini event held at their headquarters in Cupertino, California.

As reported by Engadget, Cook seemed especially proud of this particular number: Since iOS 6 was released to the general public in mid-September, 200 million devices have been upgraded to Apple's mobile OS. Cook said, "This is the fastest upgrade rate of any software in history -- that we're aware of."

Cook also repeated that the company sold over five million iPhone 5 units in its first weekend. There's also apparently still some life in Apple's iPod business, which has been on an overall decline in terms of sales in the past few years. Apple launched new designs for the iPad Nano and the iPod Touch in September and today Cook claimed that it has sold three million total iPod units since the refresh.

Cook also said that there were currently 125 million documents stored on the iCloud service and that 300 billion iMessages have been sent since its launch. There are now 700,000 apps available for download in the iOS store, including 275,000 made especially for the iPad. There have now been 35 million apps downloaded from the store.

iBooks now has 1.5 million books available to download and Cook said that so far it has generated 400 million downloads. iBooks will get an update today that will add continuous scrolling and posting book excepts to Twitter and Facebook.