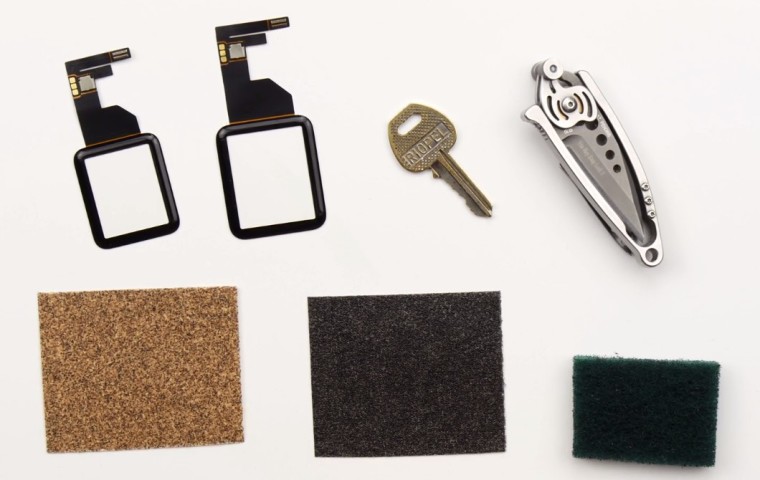 Towards the beginning of the month we were able to witness the torture test of the Apple Watch's sapphire crystal display. Unsurprisingly, the sapphire display was able to withstand quite a bit of abuse -- even deflecting the force of a power drill. While the results were somewhat expected, we now get to see how resilient Apple's lower tier "Sport" model will fare in a scratch-test.

Unlike the "Watch Edition" with sapphire glass, the Sport model utilizes something called "Ion-X" glass to protect the display. Although Apple does not go into the specifics, most are speculating that the proprietary glass is rebranded Gorilla Glass. Naturally, the Ion-X glass is able to withstand most traditional tests like the "key test" and several slices from a sharp knife. But, the Ion-X glass shows its weakness when pit against sandpaper. After several swipes with different grades, the Ion-X glass has a tremendous amount of scratches. Luckily, in most real world scenarios, your watch shouldn't be subjected to this much abuse.

While the above was a demonstration, let's pray that we don't hear chants of "#scratchgate" for months on end after the release of the Apple Watch. As previously reported, the Apple Watch is available for order, but don't expect your purchase to arrive any time soon, as most models have a delayed delivery date until June.