ASRock has announced its X670E motherboard series for AMD's upcoming Ryzen 7000 series processors. The vendor is billing today's announcement as its first wave of socket AM5 motherboards and the spotlight is entirely on the highest-end AMD chipset.

As an "extreme" variant, the X670E features 28 lanes of PCIe 5.0 support everywhere, meaning on both the primary and secondary PCIe slots if desired, and on an M.2 storage slot. All five of ASRock's X670E models are ATX form factor boards.

Leading the lineup are the X670E Taichi and X670E Taichi Carrara. As ASRock's flagship motherboards, the Taichi series pulls out all the stops with two PCIe 5.0 x16 slots, four M.2 storage slots including a heatsink and fan for cooling, USB4 support, integrated Killer WiFi 6E and 2.5G Ethernet, and DDR5 with reinforced steel slots. The Taichi Carrara, as leaked previously, is a special release to celebrate ASRock's 20th anniversary with a heatsink shroud modeled after Carrara marble. 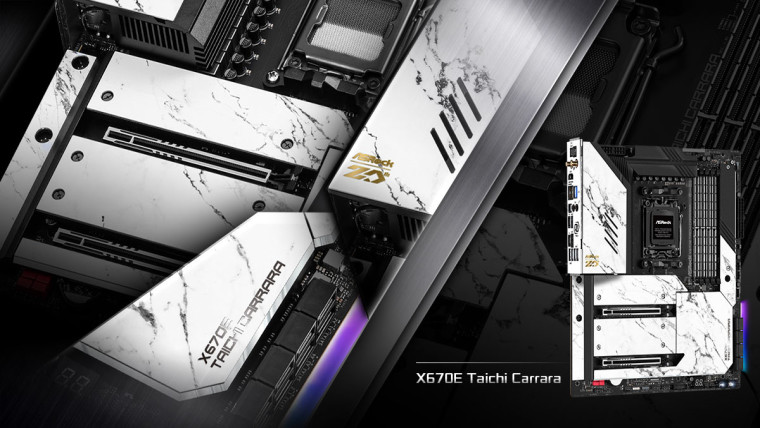 Targeting the relatively affordable end of the X670E lineup is the X670E PG Lightning. The PG Lightning forgoes most of the heatsink shrouding, but does offer the widest range of PCIe slots. Alongside the requisite PCIe 5.0 x16 slot are two PCIe 4.0 x16 slots and one PCIe 4.0 x1 slot. Also included are four M.2 storage slots and Dragon 2.5G Ethernet.

You can find more details on the motherboard models at their respective links below:

ASRock is not sharing pricing or availability just yet but they are premium boards so prices will probably reflect that.