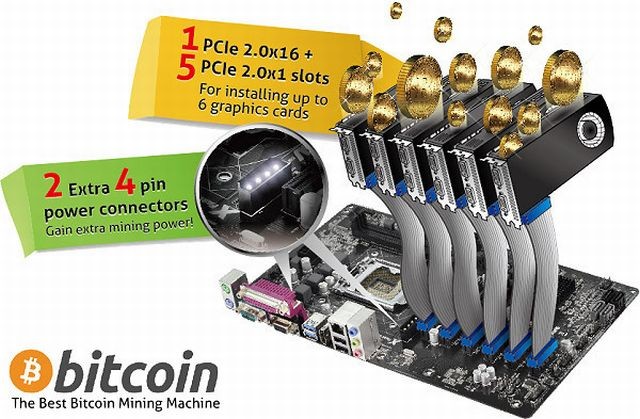 The Bitcoin currency trend shows no signs of slowing down anytime soon. In fact, it was recently named as legal tender in Germany. One of the reasons for its rise in popularity is that anyone can literally make new Bitcons by having PCs "mine" new ones. This happens because PCs can be set to solve more and more complex math problems. However, the amount of time, and the amount of processing power, needed to make new Bitcoins increases with each new one that's made.

Now, the Taiwan-based PC hardware company ASRock has announced two new motherboards that they claim are the first to be designed specifically to help with Bitcoin mining. Both the H81 Pro BTC and H61 Pro BTC models allow people to create their own desktop PCs that support up to six (yes, six) graphics cards. Both boards also have two extra 4-pin power connectors than normal.

ASRock states, "The abundant onboard PCIe slots guarantee fast GPU mining, while the additional power connectors provide advanced system stability while mining." Add it all up and the company is clearly marketing these two motherboards for the Bitcoin mining enthusiast. It may be the first time that this has happened but if Bitcoins continue to be popular, it may not be the last. Pricing for these two motherboards has not yet been announced, nor a release date.