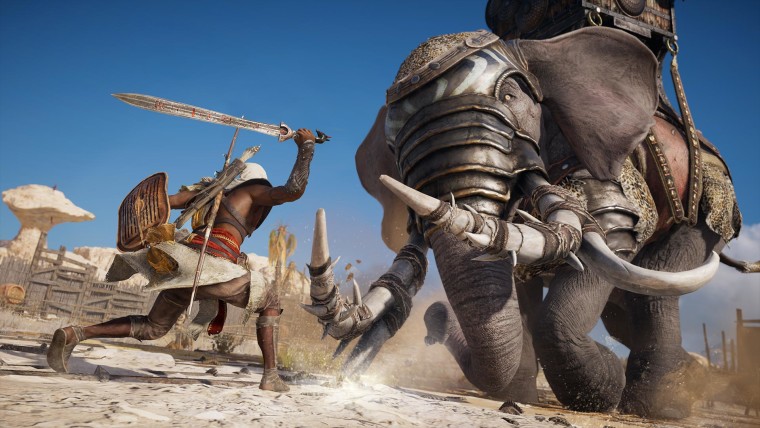 It would seem that the one year break Ubisoft took for its Assassin's Creed franchise has done the trick, with the CEO of the publisher, Yves Guillemot, telling investors last night that sales of the latest installment in the series has doubled over its predecessor Assassin's Creed Syndicate:

The success of these releases - notably the 100% sales growth for Assassin's Creed Origins - combined with solid live operations demonstrate[s] that Ubisoft is ideally positioned to deliver further growth in future fiscal years, both in terms of financial performance and shareholder value.

The previous title which was set in Victorian-era London drew a slew of criticisms for its lack of depth among other issues, which followed on the famously bug-riddled Unity game. In comparison, Assassin's Creed Origins first week of sales in the UK as noted by GFK Chart-Track, managed to sell on par with the previous game. However, the research group does not account for digital copies, which according to Guillemot, grabbed a sizable 35% chunk of total worldwide unit sales.

Beyond that, Ubisoft had some good earnings during the quarter, with both profits and sales being up thanks to the positive response from launches such as Mario and Rabbids: Kingdom Battle, and the previous bestseller of the year, Tom Clancy's Ghost Recon Wildlands. Destiny 2 took the spot away from the aforementioned game shortly after its launch in September.

Assassin's Creed Origins launched on Xbox One, PlayStation 4, and PC on October 27 to some great reviews. The game is set in ancient Egypt and tells the story of how the Assassins rose to power. It features several enhancements for the Xbox One X, which launched worldwide yesterday. Assassin's Creed Origins will get several expansions, which we detailed in an earlier report, some of which will be free to download as well.