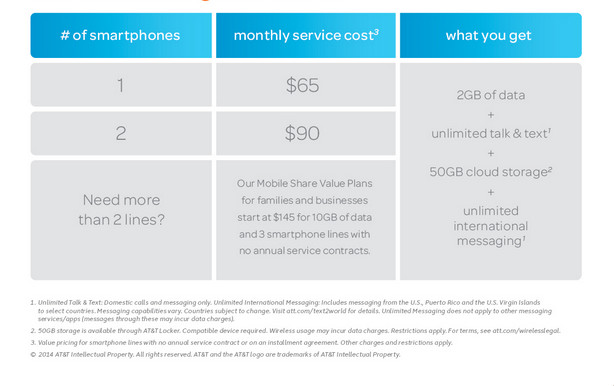 AT&T has introduced two new plans today that are aimed at customers looking for one or two lines of service. The new Mobile Share Value plans are in direct response to T-Mobile's newly revised and improved offerings, which were launched on Friday, March 7th. AT&T has decided to offer the same great reliable service by lower its previous single line price by $15.

Plans will now start at $65 and include unlimited talk and text, 2GB of data, unlimited international messaging (190 countries for text / 120 countries for picture and video messages), and 50GB of cloud storage via ATT's own Locker cloud service. Two lines of service will start at $90 and include all of the same features of the single line. The new Mobile Share data plans do not have an annual contract term and customers are eligible to take advantage of ATT's Next program to purchase a mobile handset. These new plans will join the existing Mobile Share Data plans that were introduced last month on AT&T which were for families with 3 lines or more.

How important will these changes be for AT&T's new and existing customers?

While that's debatable, one things for certain, change is good, and T-Mobile and AT&T are both looking to earn customers with change.