Microsoft Research is once again offering a way for residents of a city or community a way to view current issues that affect those areas in real time. This week, the division announced the launch of HereHere NYC, which gathers data from the many neighborhoods in the New York City area from the 311 non-emergency stream of texts, phone calls and emails. 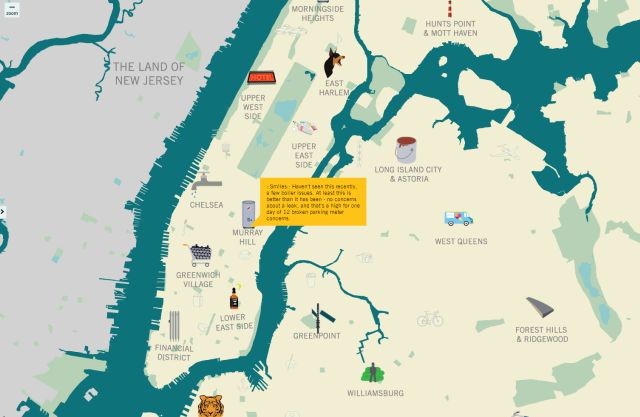 The Microsoft Research page states that HereHere NYC takes that data and generates both texts and cartoons that are supposed to represent the most important issues and concerns for each neighborhood. That information can be viewed on a map, as shown above, or sent to a resident via Twitter or email. For example, residents in the Lower West Side of Manhattan can now see that people have recently reported on a few illegal hotel issues in the area.

The idea is that we are inundated with all kinds of data in our lives, and it’s overwhelming. Characterization helps bring immediacy and a human scale to information. When the Lower East Side says it’s totally cool with a few vermin complaints, we’re giving a human voice to the neighborhood which, hopefully, will stimulate conversations about issues.

This type of project is an extension of sorts to Microsoft Research's earlier work on Whooly, which gathered Twitter messages from local Seattle communities in a way to better inform the residents about real time events.