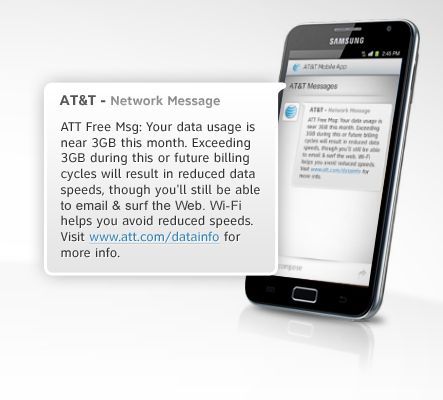 You may remember that last week, we reported that a man was successful in taking AT&T to small claims court over the wireless carrier's policy of throttling the data of users who still had an "unlimited" data plan. Now AT&T has come out with some more information about its throttling data policies, including word that 3G smartphone users will reach their cap at 3 GB per month before AT&T cuts down on their data speed. 4G LTE users have a limit of 5 GB per month.

First, AT&T defends its right to cut down the data speed on unlimited users who go over the cap, stating that their wireless data traffic has gone up a whopping 20,000 percent (no, that's not a typo) in the past five years as more and more mobile phone users switch to smartphones.

AT&T still insists that these changes will only affect 5 percent of their smartphone customers. It adds that when a user is about to approach their data limit in a month, AT&T will send out a text message alerting them to that fact. If the cap is exceeded for unlimited users, they will experience slower data speeds until the end of their billing cycle.

AT&T says that unlimited users on their network have three options. One is simply to do nothing and stick with their current plan and deal with the threat of slower data speeds every month when they reach their limit. The second is to use WiFi connections for data usage. Finally, customers can switch over to the company's tiered data plan, which doesn't cut down their data speeds but simply charges them more for every GB they go over the limit.