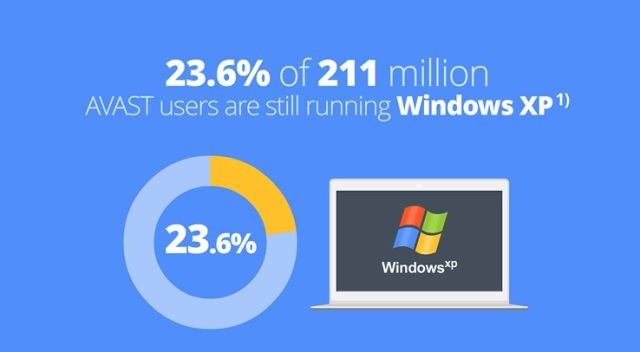 Even as Microsoft tries to get Windows XP owners to upgrade before the product becomes end-of-life on April 8th, the third party anti-virus company AVAST is calling the decision to stop all XP patches and updates a "big mistake".

In a blog post, AVAST claims that the elimination of patches for XP "will create severe security issues". It says that 23.6 percent of its 211 million customers are still using XP on their PCs and seemed to suggest that many of them could not afford to upgrade to a more recent version of Windows. AVAST stated, "Abandoning Windows XP is a big mistake, especially since Microsoft has not been very successful in transitioning XP users to newer systems."

The company also claims that the security problems connected to the end of support for XP will extend beyond just the computers that have the OS installed on their hard drives. The blog says:

Tens of millions of PCs running XP connected to the Internet, unpatched and without security updates, are just waiting to be exploited. The vulnerable OS will be an easy target for hackers and be seen as a gateway to infect other non-XP operating systems.

According to the company, the threat is even worse for XP owners who use Internet Explorer 8, which AVAST says lacks "a number of security improvements available in its later versions" that are not supported by XP. Both Google's Chrome and Mozilla's Firefox will continue to support XP for at least one more year.

AVAST has announced it will offer XP support for at least three years with its anti-virus products. As we have previously reported, many other third party software companies also plan to support XP well beyond April 8th.