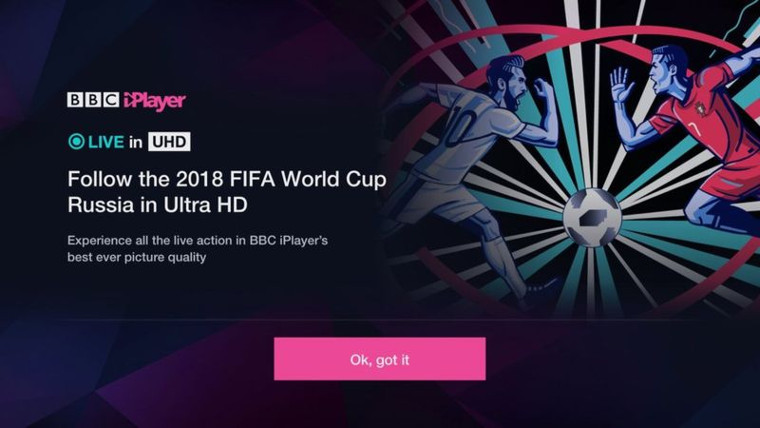 The BBC has announced that iPlayer viewers in the United Kingdom will be able to stream World Cup matches live in 4K HDR (High Dynamic Range). The feature is part of a trial that BBC is pursuing and it represents one of the first times that a sports event has been covered in such quality on the BBC iPlayer. The broadcaster did announce one small caveat, however, one which is very disappointing, and frankly surprising to see in 2018.

According to the BBC, the number of screens with access to 4K streaming will be limited, those who get access will be determined on a first come first serve basis, and with millions of people watching the event, you better be snappy at pulling up the stream.

“To gain access, viewers must be among the first to click on the relevant home screen button just after each stream starts.

To enjoy the optimum experience, the BBC says audiences will need a 40 megabit per second (Mbit/s) internet connection - which is faster than that to which most households have access.

Those with slower download speeds may find they are provided a lower-resolution image.”

In addition to the 4K HDR stream, BBC will also launch an app for iOS, Android, Gear VR, Oculus Go, and PlayStation VR which will let users watch the match from a “luxury private box” or from behind either of the two goals. The apps will be launched closer to the start of the event.