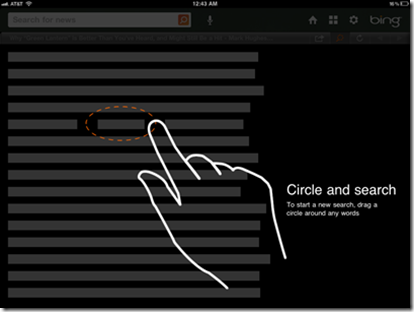 The iPad's huge sales success is causing more and more companies, including rivals of iPad's maker Apple, to create apps and web sites made specifically for the device. Today, Microsoft released a new version of its Bing search app for the iPad that adds an interesting new feature. As reported on the Bing web site, the new feature is called Lasso and it's designed specifically to use the iPad's big touch screen.

Microsoft states that normally it can be a pain to use a search engine on the iPad if you want to copy and paste some text on a web page or document to a search engine box. Microsoft claims that it can take as many as nine separate steps to use the iPad to search for texts. The Lasso feature in the Bing iPad app eliminates many of those steps. All you will have to do is enable the Lasso feature in the Bing app and then circle around the text that you want to search on via your finger on the iPad's screen. Bing then automatically searches for the text you have circled. That's basically two steps instead of nine. At the moment the new Lasso feature is only for the iPad app although Microsoft says "we’re already thinking about how to take Lasso even further."

The new version of the Bing iPad app also has some more new features and improvements including being able to "swipe through the last six Bing homepage images" and an improved movie theater search feature.