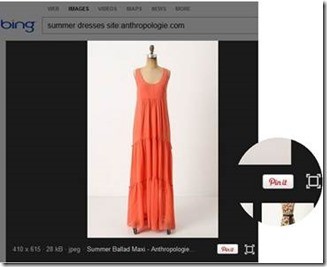 Microsoft has embraced social networking services with its Bing search website for some time. Recently, the company announced it was adding Klout rankings to its Bing Snapshot feature. Today, it's expanding the search engine's social networking capabilities even further by giving users a way to interact with Pinterest.

Pinterest is, of course, the photo-sharing network that lets its users create categories of virtual photo pinboards. In a new post on Microsoft's Bing blog, the company said it added Pinterest support to the search site after meeting with a number of lifestyle and design bloggers. It stated:

What we discovered is a community that does more than its fair share of image searches, with much of it tied to Pinterest. They shared some of the hassles they face, and that finding efficient ways to hunt down original, high-resolution images and filtering image results were some of their pain points.

The new Bing Pinterest feature basically allows anyone who searches for images on Bing to instantly pin images to their Pinterest boards. Microsoft says that any image found on Bing and then pinned on Pinterest automatically generates a link to the image's original source, along with its full attribution description.