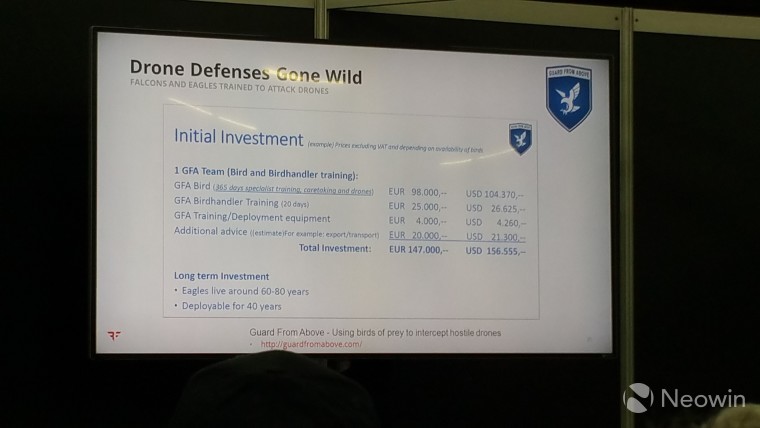 The first day of Black Hat was a whirlwind of InfoSec stories and information. While I already covered the great keynote presentation by Facebook CSO Alex Stamos, and tried to shine a light on the lack of printer security courtesy of HP, there are so many different topics being discussed at the conference that nobody can possibly see even a fraction of what is being presented.

One of the more interesting talks I attended was entitled, "Game of Drones," and was presented by Fran Brown of security consultant company Bishop Fox. In the talk, they presented research on how effective anti-drone measures are, from the infamous eagles to shotgun shells with nets to a Patriot missile. Curiously, Brown concluded that most of the so-called solutions are currently either vaporware or snake oil. When attempting to purchase most of them from various vendors, they were frequently told that version 1 was no longer on the market and version 2 was being released "very soon." And while some of the solutions, such as the aforementioned falcon, are real, the costs generally do not correlate with the threat. A bird costs over $150,000 and is actually illegal to use in the United States, although they are legal in other countries. A Patriot missile costs millions (and was actually used to shoot down a drone), but is obviously not practical and a bit of overkill in any situation. That leaves many of the so-called "net" solutions, whereby a second drone tries to capture its prey in a net, or a shotgun shell loaded with a net attempts to bring the drone down.

Unfortunately, many of these solutions are actually easily protected against by protecting the drone's propellers with a simple chicken wire dome. The mesh is light enough to still allow flight, but sturdy enough to prevent the attacking nets from tangling the propellers.

Wired did an article about Bishop Fox with videos highlighting some of the different drone defense mechanisms, and it's definitely worth a watch.

The company also announced version 2 of its "Danger Drone," a simple drone that carries a Raspberry Pi, allowing hackers to fly it around and attempt to compromise devices that would otherwise be out of range. Although there were no details about the new version on the Bishop Fox website, the parts list for version 1 is still available, as are the 3D print files, so you can build your own for roughly $500.