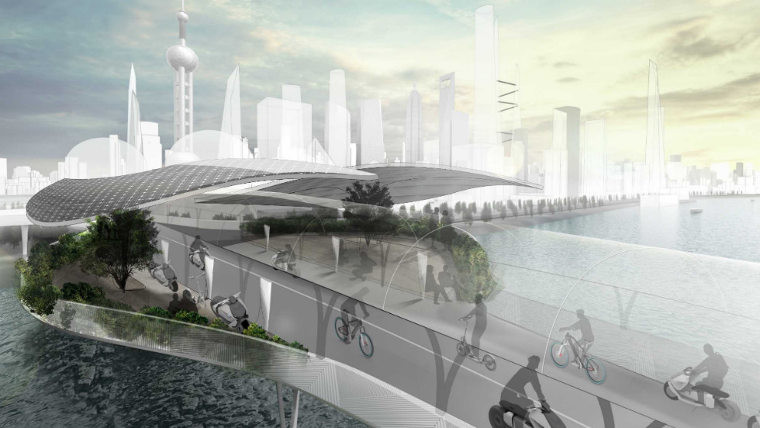 BMW has paired up with Tongji University in a plan for the future called Vision E3 Way, a futuristic AI-managed elevated electric bike pathway system designed for congested cities.

It might not be suitable for North American cities that rely largely on cars for transport, but might work best in somewhere like Shanghai where lots of people already use bikes.

The concept envisions a network of elevated tunnels that traverse a city and avoid their busy roadways. These elevated tunnels will obviously offer e-cyclists a less traffic-congested way to get across town that also isn't affected by weather. The tunnels will not get too hot or cold as they will use captured rainwater for a climate control system throughout. Even if there is a buildup of other e-cyclists within the tunnels, an AI management system will regulate the network by raising or lowering barriers at the entry points.

To ensure everything goes smoothly, there will also be a 15.5 mph speed limit and normal bikes will not be allowed. The designers want this to be the fastest form of travel for distances of around 15 km in a city center, so assumedly normal bikes won't be allowed because they might clog up the path if a normal cyclist is slower than the electric bikes and scooters.

Potential e-cyclists will not be able to use this for free though, as there will be a distance-based fee that will be linked to users' phones. Alternatively, e-cyclists might also not own the e-bikes they use in the system and they could rent them as many people already do with the Boris bikes of London.

Some of the designers quite boldly describe this as their version of the Hyperloop. Overall it seems like an e-bike alternative to a subway because users have to access the system from set points and can't exit at just any point on the route.

The concept isn't that complicated. It's really just a raised bike path, but building elevated tunnels that stretch across whole swathes of the city is surely going to be the biggest challenge. However, BMW and the university insist that they will be able to get around this challenge by prefabricating the tunnel segments.

The coming of autonomous electric cars is inevitable and the fact that a major car maker like BMW is behind this e-bike initiative certainly adds to the notion that transportation as we know it is going to be substantially different in the future.