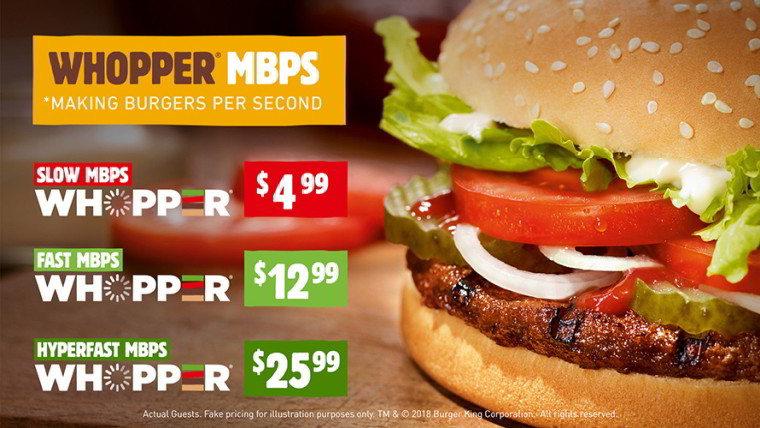 The furor over the net neutrality repeal has started to die down a bit, except for some tech companies and lawmakers working in the background to get the FCC's edict overturned. Unfortunately, the average American doesn't know what all the fuss is about or how it could impact them. So net neutrality proponents are getting an assist from an unlikely source - Burger King.

The company supposedly used real customers in its newly released ad, explaining the prioritization and fast lane vs. slow lane access to their Whoppers in a timely fashion. They even play off the internet speed term of Mbps as meaning "making burgers per second."

The ad plays off a worst case scenario where ISPs could throttle speeds for content, something that has not been totally ruled out. But it also delves into whether customers were offered the chicken sandwich option, explaining that the company has determined that they can make more money through those sales. It subtly hits on how ISPs could channel you to other products with offers of faster speeds, especially if those products being in extra money.

The ad is really well done, and a must-see for anyone that does not fully comprehend just what the loss of net neutrality could mean. And if you aren't a fan of FCC Chairman Ajit Pai because of his position on the repeal, you will appreciate the dig at him by the King at the end.