Last September, Cherry Mobile launched its first Windows Phones and tablets, including an ultra-affordable handset, priced at 2,999 PHP (just under $70 USD). Based in the Philippines, the company's range of 'Alpha' Windows devices included two phones, an 8-inch slate, and a 10-inch tablet with a detachable keyboard.

As Gadget Pilipinas reports, Cherry has now unveiled two new handsets, both of which will launch with Windows 10 Mobile onboard. Curiously, one of the devices appears to sport the current "Windows Phone" branding on its rear, but this is likely to be an error with the promotional graphic - these things do happen. 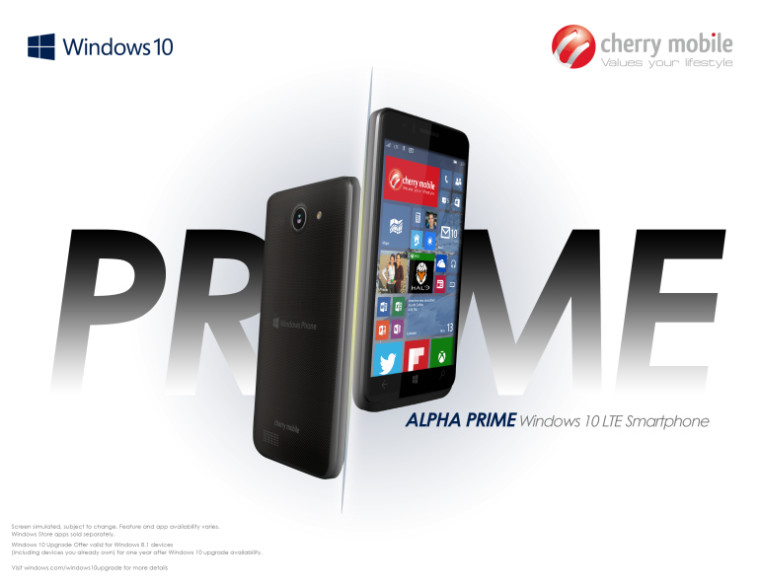 While the company has not yet issued a detailed news release, the key specs of the handsets as reported are:

The reference to the 'Snapdragon 8909' - which isn't a marketing name of any Qualcomm processor - refers to the MSM8909 SoC, better known as the new-generation Snapdragon 210 processor for low-end devices, which features an Adreno 304 GPU, along with integrated 4G LTE support.

While neither handset is especially well-equipped - unsurprising, given that they're likely targeting the most affordable end of the market - the smaller Alpha Prime 4 is an unusually bare-bones offering, with just 4GB of onboard storage and 512MB of RAM.

Details of pricing and availability have not yet been revealed, but bear in mind that while Windows 10 will launch for PCs and tablets on July 29, the Mobile version isn't expected to arrive until later this year, so the wait for the new Alpha Prime handsets is likely to last a few more months.