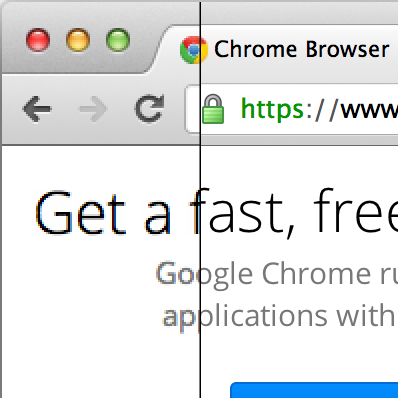 Heavy users of the Chrome web browser now have a new stable release to download. Google has now launched Chrome 21, just five weeks after it released the stable version of Chrome 20. This new version adds support for viewing web pages with the 2880x1800 resolution found in the recently launched new Macbook Pro laptops.

The new Chrome 21 (officially 21.0.1180.60 for the PC and 21.0.1180.57 for Mac and Linux) also has added support for the the getUserMedia API, which lets the browser access any web applications that support a webcam and microphone. In a blog post, Google gave an example of how this new feature can be used.

In Chrome Web Lab, if you're on the latest version of Chrome, the Sketchbots experiment uses getUserMedia to let you take a picture of your face, which is then converted to a line drawing and sent to a robot in the Science Museum in London. The robot then draws out your portrait in a patch of sand, which you can watch live on YouTube and visitors can watch in person at the museum. It’s just about as crazy as it sounds, and twice as cool.

The blog also says that Chrome 21 has added more support for gamepads, along with improved support for Google Cloud Print features.